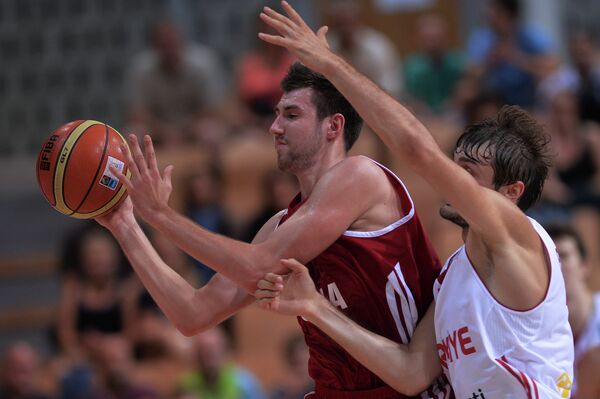 Russia’s national basketball team is “ashamed” after failing to get past the opening stage of the European championships for the first time in its history, captain Sergei Monia told R-Sport on Tuesday.

KOPER, Slovenia, September 10 (R-Sport) – Russia’s national basketball team is “ashamed” after failing to get past the opening stage of the European championships for the first time in its history, captain Sergei Monia told R-Sport on Tuesday.

A year after winning bronze at the London Olympics, Russia finished last in its EuroBasket group with just one win out of five games and defeats to such minor basketball countries as Finland and Sweden.

Despite the unprecedentedly poor performance, the president of the Russian Basketball Federation has been quoted as saying she still supports coach Vasily Karasev.

“The way we competed at the tournament, the whole team was ashamed,” captain Monia said. “I certainly haven’t felt that ashamed after games for a long time. I had some crazy thoughts in my head, to be honest.”

The team was without several leading players, including Minnesota Timberwolves forward Andrei Kirilenko, who has retired from international play, and Denver Nuggets center Timofey Mozgov, who opted not to take part for what Monia called “unclear reasons.”

Russia’s campaign ended with Monday’s 89-77 win over Turkey in a game that was meaningless for both teams, neither of whom could qualify.

Coach Karasev, the father of new Cleveland Cavaliers signing Sergei Karasev, hailed the Turkey victory as a silver lining to an unsuccessful tournament.

“I liked the game, completely,” he said. “There was a lot of movement, lots of rebounds, the players shouldered the responsibility.”

The defeats have put Karasev’s job in question, with some reports claiming the man who led Russia to Olympic bronze last year, Israeli-American coach David Blatt, could be on course to return. However, federation president Yulia Anikeeva defended Karasev, who she appointed only last month.

“He will stay with the national team independent of the results of EuroBasket,” she told Russia’s Sport Express newspaper, praising him for his “courage” in having taken the job in the first place after predecessor Fotis Katsikaris resigned.

Anikeeva had harsh words for Katsikaris, who claimed last month she had made his position untenable with jibes about his salary.

Anikeeva said Tuesday that Katsikaris had actually wanted to leave in June after recognizing that EuroBasket success would be hard with key players absent and that the Greek’s “agents and lawyers muddled the waters” over his resignation, “trying to shake us down for compensation.”