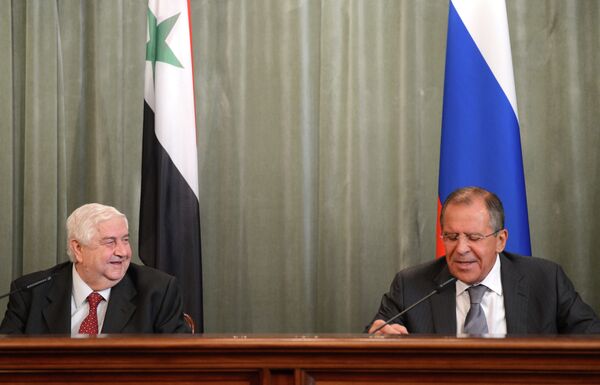 © RIA Novosti . Mikhail Voskresensky
/
Go to the photo bank
Subscribe
Russia on Monday threw its backing behind a proposal that Syria’s chemical weapons be put under international control, leading Damascus to say it “welcomes the … initiative” if it would indeed help prevent a US strike on the war-torn country – a suggestion floated by Washington earlier in the day.

MOSCOW, September 9 (RIA Novosti) – Russia on Monday threw its backing behind a proposal that Syria’s chemical weapons be put under international control, leading Damascus to say it “welcomes the … initiative” if it would indeed help prevent a US strike on the war-torn country – a suggestion floated by Washington earlier in the day.

Russian Foreign Minister Sergei Lavrov told reporters in Moscow that “if putting chemical weapons in that country [Syria] under international control would prevent strikes, we’re immediately beginning to work with Damascus,” and that a proposal had already been passed on to Syria’s Foreign Minister Walid Muallem. Lavrov and Muallem had met earlier on Monday, though it was not clear when or whether they discussed the proposal.

Muallem, in turn, said that Syria “welcomes the Russian initiative” and is “confident in the wisdom of the Russian leadership, which is trying to prevent American aggression against our people,” according to a Russian translation of the Arabic.

Earlier in the day, US Secretary of State John Kerry said Washington could refrain from attacking Syria if Damascus turns over "every single bit" of its chemical weapons to the international community within a week.

However, a US State Department spokesperson later said Kerry was “making a rhetorical comment,” Reuters reported.

The text of the Russian proposal was not made public, but Lavrov said: “We are calling on the Syrian leadership not only to agree to the placement of chemical weapons storage sites under international control, but also to [their] eventual destruction, and to full accession to the Organization for the Prohibition of Chemical Weapons.”

The United States has accused the regime of Syrian President Bashar Assad of using chemical weapons against civilians.

Most recently, Syrian rebels said the Assad regime was behind an August 21 chemical attack in a Damascus suburb that killed between 355 and 1,700 people; the United States has backed that allegation and is contemplating a retaliatory attack on Syrian government targets.

Assad has said the use of chemical weapons was a provocation by the insurgents, a stance supported by Moscow.

Syria is one of five UN member states that have not signed the 1993 Chemical Weapons Convention outlawing chemical weapons. The other four are Angola, Egypt, North Korea and South Sudan. (Israel and Myanmar have signed but not ratified the convention.)