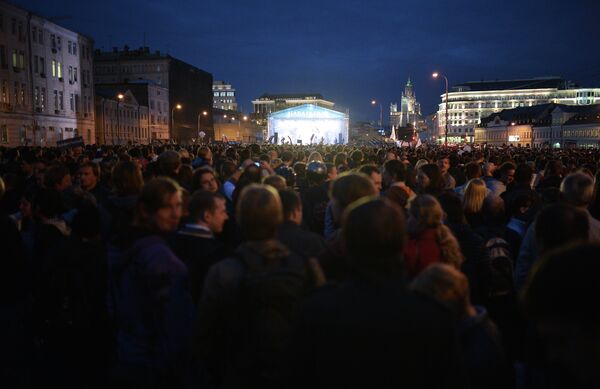 © RIA Novosti . Vladimir Astapkovich
/
Go to the photo bank
Subscribe
A crowd of thousands rallied at Moscow’s Bolotnaya Square on Monday evening in support of Alexei Navalny, an opposition runner-up in the mayoral election who claimed the previous day’s vote was “rigged” to spare the Kremlin’s candidate a runoff.

MOSCOW, September 9 (RIA Novosti) – A crowd of thousands rallied at Moscow’s Bolotnaya Square on Monday evening in support of Alexei Navalny, an opposition runner-up in the mayoral election who claimed the previous day’s vote was “rigged” to spare the Kremlin’s candidate a runoff.

City police said that about 9,000 attended the event at the downtown venue, which has hosted numerous opposition protests since late 2011. The organizers did not announce any turnout estimates.

The event ended peacefully despite Moscow prosecutors issuing a warning to Navalny over his alleged calls for civil disobedience.

“If there will ever be a time to light flares and turn over cars, I’ll tell you as much and I’ll be there with you,” the 37-year-old told his supporters from the stage with a sardonic grin.

“A serious opposition force is born in Russia,” Navalny said, adding that he would be pushing for a partial recount and a runoff.

Navalny got 27.24 percent of the vote on Sunday, compared with 51.37 percent for acting Mayor Sergei Sobyanin, a former Kremlin official, according to the city’s election commission. Communist Party nominee Ivan Melnikov got 10.69 percent, and the three remaining candidates all scored in the single digits.

Independent vote monitor Golos, which ran a network of election observers on Sunday, put Sobyanin’s result at 49.45 percent and Navalny’s at 28.56 percent.

Navalny claimed on his blog Monday that at least 28,000 ballots, or 2 percent of the vote, were rigged to give Sobyanin more than 50 percent, thus ruling out a runoff.

Navalny on his blog demanded a recount at polling stations with alleged irregularities. But he said at the rally that he was content with the Moscow electoral commission promising to look into his complaint.

A spokesman for the commission said Monday that it would review Navalny’s complaints if any is filed, but added that Navalny’s fraud allegations were “baseless.”

Sobyanin’s compaign staff declined on Monday to hold talks with Navalny, redirecting him to the courts and the Moscow election commission. Sobyanin also called the vote “the most fair and competitive” in the city’s history.

“Hope is all we have, that’s why we came,” rally-goer Sergei Bakhtiyarov said, speaking about the possibility of a runoff.

“Objectively, Sobyanin is considered a better fit for the [mayoral] position, but it’s more important in this case to fight for … the fairness and transparency of the elections,” said Bakhtiyarov, a 20-something who declined to give his occupation.