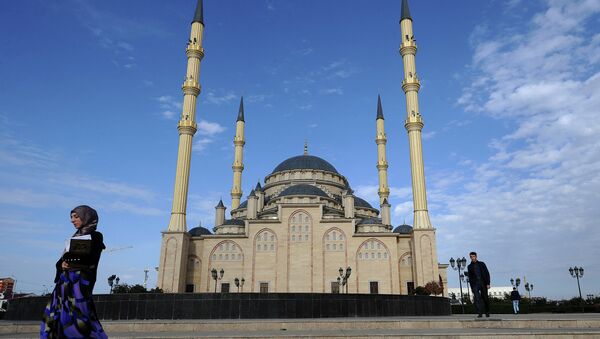 Chechen leader Ramzan Kadyrov has praised the organizers of a nationwide contest to name 10 new visual symbols of Russia for their decision to declare Grozny’s Akhmad Kadyrov Mosque as the “early winner.”

MOSCOW, September 9 (RIA Novosti) – Chechen leader Ramzan Kadyrov has praised the organizers of a nationwide contest to name 10 new visual symbols of Russia for their decision to declare Grozny’s Akhmad Kadyrov Mosque as the “early winner.”

The Akhmad Kadyrov Mosque, one of the largest mosques in Russia, officially known as the “Heart of Chechnya,” was declared the winner of the vote “ahead of schedule” on Monday along with the Kolomna Kremlin, a medieval castle outside Moscow.

“We hail such an approach to the issue. We believe that this is highly fair and unbiased,” Kadyrov wrote on Instagram. He added that he hoped the contest “would help bring the peoples of Russia closer and respect our common history and culture.”

Organizers explained the move by saying they had problems with tallying the votes cast through cellphone text messages, adding that some 5.2 million text-message votes were lost that could have “significantly affected the ranking between the leading sights.” They also claimed the online voting was attacked by hackers.

The scandal broke out when the Akhmad Kadyrov Mosque, built in 2008, narrowly lost in August the second round of the Russia-10 contest, aimed to select Russia’s best unknown landmarks in order to give a boost to domestic tourism and “geo-patriotism,” as the organizers called it.

During the second round of the voting on August 30, the mosque, which had led the running for most of the time since the contest started on July 1, scored 38.2 million votes. The Kolomna Kremlin scored 38.6 million votes.

Kadyrov claimed that cellphone operators had ignored some 4 million votes cast in favor of the mosque, denying it victory, and said he would withdraw his region's landmark from the contest.

The online voting will continue on Tuesday to select the other eight landmarks from around 30 contestants. The final results will be announced on October 6. Under the rules of the contest, each of the 10 sights is considered as “an equal winner,” organizers say.

The top sights in the Russia-10 contest also include a sculpture park called Legend in Penza Region, in central Russia, as well as another mosque and one more kremlin, two Christian landmarks, a Buddhist temple, a volcano and Lake Baikal, the world’s largest fresh-water lake.