Polar Mission – Tracing the Last Movements of the 'Soviet Lindbergh' 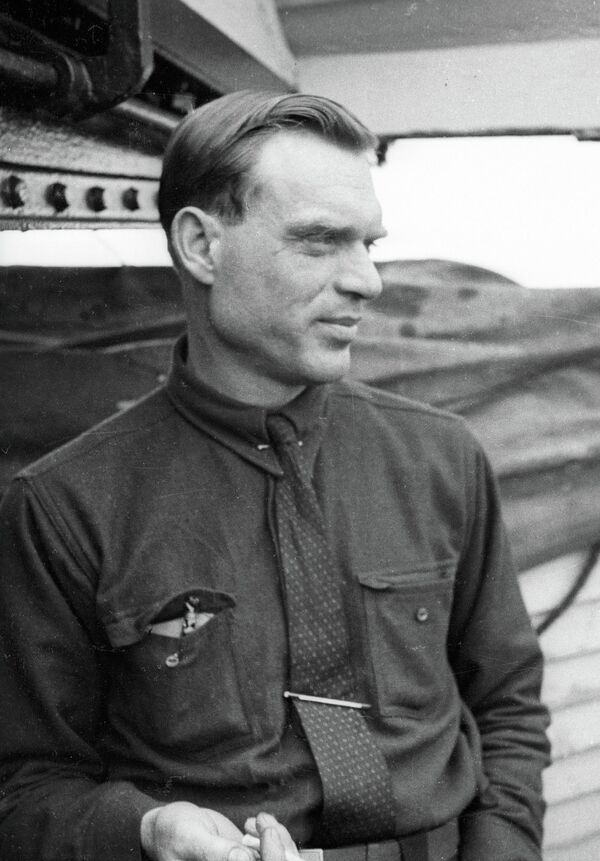 © RIA Novosti . Mikosha
/
Go to the mediabank
Subscribe
International
India
Africa
On August 12, 1937, Soviet pilot Sigizmund Levanevsky, known in America as "the Soviet Lindbergh," and his five compatriots took off from Moscow in massive plane bound for the United States via the North Pole in a highly risky flight.

MOSCOW, September 8, (Alexandra Odynova, RIA Novosti) – On August 12, 1937, Soviet pilot Sigizmund Levanevsky, known in America as "the Soviet Lindbergh," and his five compatriots took off from Moscow in massive plane bound for the United States via the North Pole in a highly risky flight.

A day later, the plane veered off course.

It vanished somewhere in the Arctic, and for decades this story has been one of the great, unsolved mysteries of aviation history.

Earlier this week, over seventy years since takeoff, a group of Russian and American enthusiasts are on the verge of solving the tragedy of the first cargo-passenger flight from Moscow to Alaska.

“Years ago I found some evidence that gave me confidence on where we should search for the plane,” Yuri Salnikov, member of the Russian Geographic Society who organized the expedition, said in a recent interview.

N-209 aircraft fell off the radar a day after takeoff somewhere on the North American side of the North Pole. Salnikov and his colleagues are convinced that Alaskan Eskimos have clues to the plane’s disappearance.

A Soviet pilot of Polish origin, Levanevsky first made headlines in the foreign press in 1933, after taking part in the rescue of legendary US aviator Jimmie Mattern, who crash landed in Siberia on a round-the-world trip, and flew him to Alaska. Mattern was later among a team of top American, Canadian and Russian pilots who searched for the lost Soviet plane.

By 1937, Levanevsky was already talked about in the American press as "the Soviet Lindbergh," after famous US aviator and explorer Charles Lindbergh, in part due to his dashing looks, blond hair and achievements.

The flight made by Levanevsky and his crew was supposed to become a symbolic moment in US-Soviet relations, and he hoped to complete a landmark, heroic flight.

“Even courage and adventure are being socialized in Soviet Russia,” The New York Times wrote in the lead of its preview a few weeks before the projected flight.

At that time, the Soviet exploration of the northern routes was accelerating as the government wanted to expand economic development in the Arctic. This was not the first Soviet flight to the US across the pole, but it was seen as an unparalleled step toward establishing a regular US-Russian airline that takes the Arctic route.

Its cargo included Russian souvenirs for the Americans: furs and 32 kilos of black caviar. Soviet authorities even made a rare gesture by allowing foreign press to watch the takeoff.

“Every time I have visited America the people have extended me a most cordial and friendly reception. I hope the flight will help to cement good relations between our countries…” Levanvesky, 35, told The New York Times correspondent before taking his seat.

The plane was scheduled to reach Fairbanks after about 30 hours of continuous flight. Fragments of telegrams received from the crew indicated that the plane crossed the North Pole and most likely made it almost to the Alaska North Slope coast.

“No bearings … having trouble with … wave band,” said a translated message intercepted from the plane by a US station in Anchorage, the Associated Press reported at the time. The message gave no indication as to the aircraft’s location.

A string of Soviet-American searches were organized in the area, but they found no trace of either the aircraft or the crew, and were soon wound up.

A year later, in 1938, a clergyman and explorer from California, Homer Flint Kellems, wrote a report to the Soviet Embassy about three young hunters who, he believed, were the last people to see the aircraft, near Oliktok Point in Alaska on August 15, 1937.

But the message took its time making its way through diplomatic bureaucracy, and was only delivered to Moscow in 1939, when war was heating up near Russia’s western borders. The letter went unanswered, and stayed there, filed away in the Foreign Ministry’s archive, for decades until Yuri Salnikov, who was making films about prominent Russian aviators, found it in 1983.

The letter speaks of “three Inupiat hunters from Alaska, who had never seen an aircraft in their life, looked through binoculars and witnessed how a massive machine in the air was flying at low altitude, then hit the water and soon crashed into the sea near the Jones Islands,” Salnikov told RIA Novosti.

Later in 1996, a copy of Kellems’s findings about the three hunters was published in The Alaska Sportsman. It said that the Eskimos sailed to the island where they saw the “machine” but found only an oil slick.

One of those Eskimos talked about what they had witnessed to radio operator Stanley Morgan based in Barrow, who was convinced that the man was not lying.

“While working in US archives in 1989, I found [Morgan’s] radio message about the meeting” addressed to his superiors in the Signal Corps, Salnikov said in the interview.

Kellems sailed by boat to Barrow and used Morgan’s story to start his investigation. His small crew, equipped with just a compass, tried to search the area. But the risk of becoming ice-bound meant they had to call it off before finding anything.

More recently, Alaskan researchers have carried out several expeditions to the place that is believed to be the plane’s crash site, but even they have only managed to scan only a small part of the entire area, Salnikov says.

David Stone and Dennis Thurston of the Geophysical Institute at the University of Alaska, Fairbanks, are joining the Russian team in making a new attempt to find the lost plane.

“Now we are looking for those three Eskimos’ children and relatives,” Salnikov said.

Records from Morgan indicate that one of the three hunters was also a college student and kept a journal in which he recorded their observations that day, which could be of great help in this search.

A Canadian geophysicist involved with the expedition, Bil Thuma, said that even after 76 years in icy water some parts of the 17-ton plane (34 tons with fuel) could be still intact.

“If it is there, we should find it,” he said in a telephone interview. “It is not impossible but it takes time,” said Thuma, who has already helped find several lost aircraft.

He first got involved in searching for WWII aircraft on the Greenland icecap in 1985. The Glacier Girl fighter, missing since 1942, was recovered 50 years later and has since been restored.

Now, for the first time, he is looking for a Soviet plane.

Salnikov said that they hope to search waters around Oliktok Point, though they have limited time as the waters will soon freeze – making sailing impossible.

The organizers said that, so far, their funding is limited to the Russian Geographic Society’s grant of 1.5 million rubles (about $45,200) and some private donations, but that this will not cover the high-tech scanning of the entire area.

“It is complicated. It will require three expeditions” to find and recover the aircraft, Thuma said, adding that they are planning to try raise more money in Canada and the US.

Traces of a Soviet Cover-up

The crash is not the only lingering mystery in the story of Levanevsky’s last flight.

Relatives of crewmembers and colleagues who saw them off, recollected in interviews later that they had a feeling that that they were flying to their death.

Soviet designers had warned that the huge new plane, a bomber that had been converted into a civilian aircraft, needed another year of tests and preparatory work ahead of this unique flight, but Politburo officials gave them just three months.

The plane completed test flights to Ukraine, but had not attempted to cover 4,000-miles before setting off on what was to become its final flight.

There are still unconfirmed rumors that the Soviet authorities did not publish some of its radio messages, which were either classed as classified or destroyed. One of the crew’s last wires contained an unknown code “3400” which might be a clue to the plane’s location, but nobody has yet worked out what it means.

Some Russian authors have even speculated that the aircraft had been tasked with a special mission – delivering a secret cargo of several tons of gold.

Mission to Honor the Missing

September’s expedition will investigate one of at least three main theories on the plane’s possible current location.

An earlier version of the accident suggested that the aircraft suffered engine failure and went off course – heading to Yakutia in northern Russia. But this suggestion has never received significant backing among the expert community.

A team of polar explorers headed by Vladimir Chukov, which first ventured into the Arctic in 2002, is planning a separate trip in 2014 to investigate the theory that Levanevsky’s crew landed on Ellesmere Island in the Canadian Arctic Archipelago.

The chances of finding the wreckage are higher than ever before – due to increased interest in expeditions and funding.

“It is important for us not to forget those people… We too often lose sight of the sacrifices many made to get us to where we are today,” Thuma said in an interview from Canada.