US Congress Finds ‘Overwhelming’ Public Opposition to Force in Syria 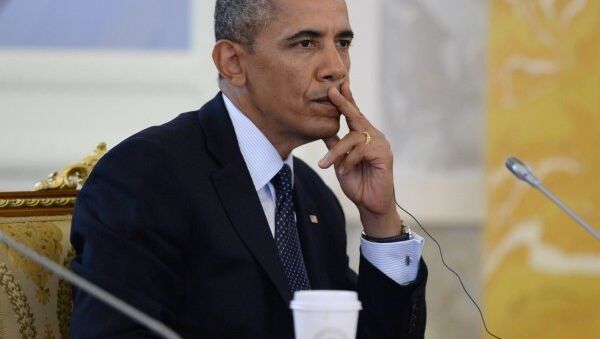 As US President Barack Obama works to drum up Congressional support for a military strike against Syria, he may face a tougher job selling his plan to the American people.

WASHINGTON, September 6 (By Maria Young for RIA Novosti) – After three days of non-stop phone calls from hundreds of Colorado constituents opposed to a US military strike on Syria, Rep. Doug Lamborn announced Friday he was “leaning against” a resolution giving US President Barack Obama the authority to take limited action.

Following a long holiday weekend, “Tuesday is when the calls started, they’re still coming in, and I would say fewer than two percent are people who want us to take action,” said Catherine Mortensen, Lamborn’s communications director.

“People say things like, ‘We have problems at home we need to take care of.’ And what was surprising was how quickly people’s opinions had gelled. They’re not lukewarm. Right off the bat on Tuesday it was, ‘We don’t need this.’ It’s been overwhelming,” she added in an interview with RIA Novosti.

While Lamborn was answering questions from listeners during a radio show Friday morning, Mortensen said, “One man phoned in to say, ‘I’m in Afghanistan, and I don’t want this anymore.’”

By the end of the show, Lamborn, a Republican, who previously had said he was gathering facts and hadn’t made up his mind yet, told listeners he was inclined to vote against the resolution.

And Lamborn’s office is not alone.

Other Congressional offices say they have also been bombarded ever since Obama said last Saturday that he would ask Congress to approve a “limited” strike against the government of Syrian President Bashar Assad in response to an alleged chemical weapons attack last month.

“I can tell you 99 percent of the calls coming to my office are against it,” said Democratic Rep. Elijah Cummings of Maryland in a televised interview on MSNBC.

Sen. John McCain, a Republican from Arizona who lost the presidency to Obama in 2008, voted to support his old rival during a Senate Foreign Relations Committee hearing this week, but took significant heat about it from angry constituents at a town hall meeting in Arizona Thursday.

“This is what I think of Congress,” said one man in the crowd, holding up a bag of marshmallows. “They are a bunch of marshmallows…Why are you not listening to the people and staying out of Syria? It’s not our fight.”

Some of those calls and comments to Congress appear to be having an effect.

After days of discussions with voters, Rep. Tom Cole, a Republican from Oklahoma, announced late Thursday in a statement on his website that he would vote against the president’s request, saying the situation in Syria is a civil war that America should not be drawn into.

“This is not just my opinion. It is the considered opinion of the people that I represent, expressed not at just one or two town halls, but literally at every public or private meeting and casual encounter I have had since the president decided to put this issue before Congress last Saturday,” he said, adding, “I have heard their opposition loud and clear and will not vote in favor of military intervention in Syria.”

Upon hearing word about a chemical attack that had killed men, women and children, Republican Rep. Michael Grimm from New York said his initial reaction, as a Marine combat veteran, “was to stand by the Commander in Chief and support immediate, targeted strikes.”

Grimm announced Thursday he, too, had changed his mind.

“I have heard from many constituents who strongly oppose unilateral action at a time when we have so many needs here at home. Thus, after much thought, deliberation and prayer, I am no longer convinced that a US strike on Syria will yield a benefit to the United States that will not be greatly outweighed by the extreme cost of war,” he said in a statement on his website.

The Obama Administration thus far has “failed to present a convincing argument that the events in Syria pose a clear threat to America, failed to list a strong coalition of nations willing to support military attacks, and failed to articulate a clear definition of victory,” said Arizona Republican Rep. Matt Salmon in a statement on his website explaining his opposition to a strike.

Salmon told the National Review Online he’s had 500 calls to his office about the crisis in Syria, and only two have been in favor of US intervention. He predicted Obama’s efforts in Congress “will fail by 20 votes.”

But Obama is counting on members of Congress like California Democratic Sen. Dianne Feinstein, chairwoman of the Senate Intelligence Committee, who has viewed classified information about the chemical weapons attack and said Thursday she supports the strike on Syria, despite the lack of public support.

"There's no question: What's coming in is overwhelmingly negative," she said, according to the Associated Press. "But you see, then, they don't know what I know. They haven't heard what I've heard."

During a press conference from St. Petersburg soon after the G20 summit wrapped up on Friday, Obama said he would address the nation about the crisis on Tuesday, telling reporters he considers it part of his job to “make the case.”

"It's conceivable that, at the end of the day, I don't persuade a majority of the American people that it's the right thing to do," Obama said to reporters.

But he added that members of Congress will have to decide for themselves if they think a strike is the right thing for national and global security.

"Ultimately, you listen to your constituents, but you've got to make some decisions about what you believe is right for America," he said.

Obama did not say whether he would still order a strike even without Congressional approval.