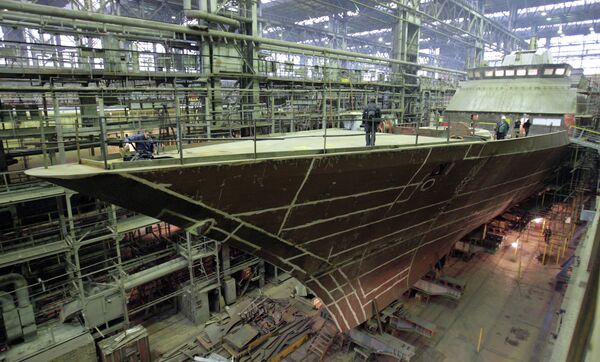 Citing unnamed sources who attended the closed-door meeting at the Krylovsky research center in St. Petersburg, Kommersant said Deputy Defense Minister Yury Borisov’s address “in fact set out new rules of the game” in the shipbuilding industry. Similar meetings will soon take place on the military aerospace and space sectors, the sources told the paper.

Borisov said Russia's new military shipbuilding program until 2050, which has to be drafted by November, should primarily focus “on quality.” He said less funding will be provided for the program than previously, but did not say by how much.

The new naval shipbuilding program will cut the number of ship types while increasing their number, and also ensure more efficient budget spending throughout the entire life cycle of each ship, Borisov said according to Kommersant.

“We need ships that will serve 50 years, not 30 years and that can undergo five or six modernizations,” Borisov said, the paper reported, adding that it was important to encourage shipbuilders to build fewer ships of better quality.

Under the rearmament program for the period until 2020, some 5 trillion rubles ($150 billion) has been allocated for the Navy, Borisov said, of which 47 per cent will go into building new ships.

Borisov criticized previous state rearmament programs, that he said had not been fulfilled due to “wrong assessment of planned spending, the high inflation rate, low level of prepayment, underestimated costs and out of control growth in prices” for warships. He compared the cost of building a ship to the "budget of a city," saying pricing is a burning issue for the industry, the report said.

Borisov’s ultimatum to the industry is the latest in a series of direct addresses by senior Russian officials to naval shipbuilders, and in particular the United Shipbuilding Corporation.

Last May, President Vladimir Putin fired the corporation’s boss Andrei Dyachkov after just ten months in the job, replacing him with the head of tank maker Vladimir Shmakov, with a brief to shake up the sector.

In August, Deputy Prime Minister Dmitry Rogozin, who oversees the defense industry, said all contracts for naval ships should be “unified,” including all systems on board including weapons, in a bid to keep control of costs.