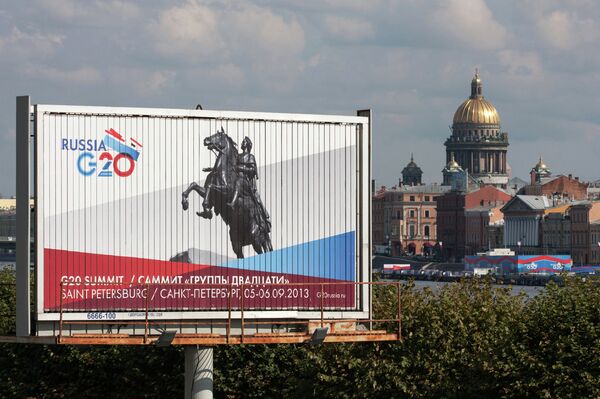 © Photo : Photo host agency/ Anna Volkova
/
Go to the mediabank
Subscribe
International
India
Africa
A discussion focused on the critical situation in Syria is not currently on the agenda of the G20 summit in St. Petersburg, Russia’s presidential spokesman told RIA Novosti.

STRELNA/MOSCOW, September 5 (RIA Novosti) – A discussion focused on the critical situation in Syria is not currently on the agenda of the G20 summit in St. Petersburg, Russia’s presidential spokesman told RIA Novosti.

Peskov also said there “are currently no changes” concerning communications between Putin and US President Barack Obama at the summit.

The G20 summit was originally due to have been preceded by a bilateral Putin-Obama meeting in Moscow. That discussion was cancelled following heightened tension over Russia’s decision to grant temporary asylum to fugitive whistleblower Edward Snowden, despite Washington’s repeated demands for his extradition to the US.

The G20 summit is taking place September 5 and 6 in the St. Petersburg suburb Strelna. The annual international leaders’ meeting usually focuses on economic issues, but this year is happening against a background of possible intervention in the Syrian conflict by the United States and France, strongly opposed by Russia.

A separate meeting between Putin and Obama has also not been officially planned, though media speculation on the issue has been rife, with a report in Russian tabloid Moskovsky Komsomolets Thursday claiming a meeting of the two leaders was all but unavoidable.

Speaking to reporters at the G20 on Thursday, Russian Presidential spokesman Dmitry Peskov said that "a separate meeting [between Putin and Obama] is not planned but there will, nonetheless, be some kind of conversations."

Updated with last graf quote from Peskov, headline attribution changed from Peskov to Putin's spokesman at 12:57