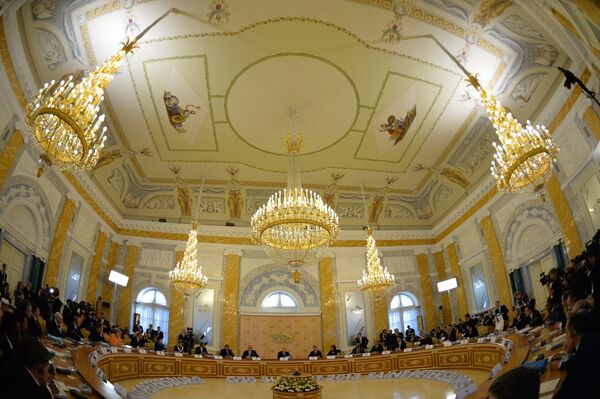 The first day of the G20 summit, traditionally a platform for economic debate, was dominated Thursday by the Syrian crisis, with Russian President and summit host Vladimir Putin proposing that world leaders discuss over dinner the United States’ call for a military strike against the Syrian regime.

ST. PETERSBURG, September 5 (RIA Novosti, Howard Amos) – The first day of the G20 summit, traditionally a platform for economic debate, was dominated Thursday by the Syrian crisis, with Russian President and summit host Vladimir Putin proposing that world leaders discuss over dinner the United States’ call for a military strike against the Syrian regime.

Putin told the summit’s opening session at the Constantine Palace on the outskirts of St. Petersburg that it would be best if discussions about Syria took place during the evening meal Thursday so as not to distract from pre-planned agendas in the event’s other meetings.

The gathering of the Group of 20, a club that includes countries with two-thirds of the world’s population and over 90 percent of its economic output, was expected to tackle issues of financial regulation, shadow banking and tax avoidance, but it has become increasingly overshadowed by US President Barack Obama’s call for American military intervention in the Syrian civil war.

Putin has led international opposition to such intervention. He has said that an attack on Syria without the backing of the United Nations Security Council would be an act of “aggression” and has accused the US Secretary of State John Kerry of deliberately lying about the situation inside Syria.

Obama appeared increasingly isolated Thursday as, after flying in to St. Petersburg, other world leaders openly expressed their opposition to a military intervention against Damascus.

The two most senior European Union officials, European Council President Herman Van Rompuy and President of the European Commission Jose Barroso, called for a “political” solution to the Syrian crisis during a joint press conference in St. Petersburg on Thursday.

“The situation remains a stain on the world’s conscience,” Barroso said. “The European Union believes that efforts should be evolved towards a political solution to the conflict.”

China also spoke out against unilateral US military action in Syria, warning that such action could lead to severe economic problems.

"Military action would have a negative impact on the global economy, especially on the oil price – it will cause a hike in the oil price," Chinese Vice Finance Minister Zhu Guangyao told a briefing, Reuters reported.

Even the Pope appeared to enter the debate with a letter to the G20 leaders calling on them to “lay aside the futile pursuit of a military solution” in Syria, according to a copy of the letter posted on the Vatican’s website.

The dinner for G20 participants during which Syria will be discussed, will take place at Peterhof, another former tsarist palace outside St. Petersburg, and will be addressed by Putin and UN Secretary General Ban Ki-moon, Putin’s spokesman, Dmitry Peskov, told reporters. The dinner will be followed by a “musical fountain show” in the grounds of the seafront palace.

Moscow has repeatedly insisted that the United Nations is the only body that can legitimate military action in Syria, a position that Peskov reiterated Thursday.

“In international relations, the only organ that can make a legitimate decision about the use of force is the United Nations Security Council – not the Russian parliament, not the US Congress,” Peskov said.

Obama has asked the US Congress to support a limited military intervention in Syria because of the regime’s alleged use of chemical weapons, which the US claims killed over a thousand civilians in one attack last month. The Senate's Foreign Relations Committee approved a motion backing a military strike Wednesday, and a final vote is expected next week after Congress reconvenes on Monday.

Washington has not hidden its dissatisfaction with the Russian opposition to military action, and Obama told reporters during a pre-summit visit to Stockholm on Wednesday that US-Russian relations had “hit a wall,” media reports said.

Peskov has said there are no scheduled meetings between Putin and Obama during the G20 summit, but that the two men are likely to talk to each other informally.

The G20’s focus on Syria was reflected in last-minute additions to the guest list. Unusually for the G20, some foreign ministers will be in attendance, although Kerry is not planning to come to St. Petersburg, media reports said.

UN officials said Thursday that Lakhdar Brahimi, the UN and Arab League special envoy for Syria, would be flying to St. Petersburg to take part in the discussions about Syria.