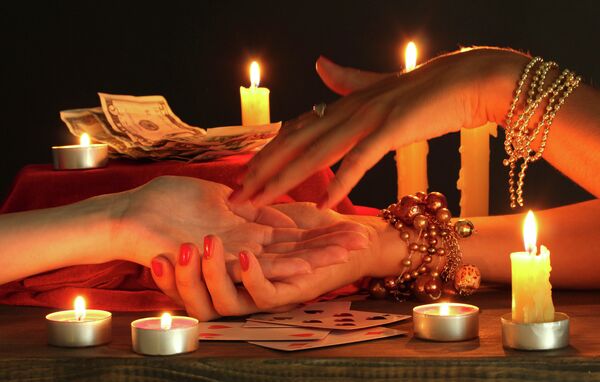 © Fotolia / Africa Studio
Subscribe
Psychics who charged an elderly Russian woman almost $20,000 to lift a supposed curse have themselves been charged with fraud and now face up to 10 years in jail, prosecutors said Thursday.

MOSCOW, September 5 (RIA Novosti) – Psychics who charged an elderly Russian woman almost $20,000 to lift a supposed curse have themselves been charged with fraud and now face up to 10 years in jail, prosecutors said Thursday.

The 75-year-old resident from the Volga River city of Yaroslavl called a phone number she saw in a television ad earlier this year to ask about her gravely ill sister, Moscow prosecutors said in a statement.

She then started to receive phone calls from psychics who persuaded her that her family members would die if she did not pay to lift a “horrible spell,” said statement, posted online.

As a result, the woman spent all of her savings, totaling 610,000 rubles ($18,500) – and only then filed a complaint, the statement said, without specifying the number of psychics who had been charged.

The case is by far not the only incidence of Russian authorities taking on self-styled psychics.

In July, Moscow police busted a psychic ring that had been lifting supposed curses for money in a parapsychology center called Sapphira, complete with a call center. Six alleged psychics now face up to 10 years in prison on fraud charges.

Last summer, more than 20 people were detained in a crackdown on another parapsychology center in Moscow, which reportedly employed more than 500 workers at its call center and had a monthly turnover of 500 million rubles ($15 million).

The occult services and alternative medicine business in Russia had a $2 billion turnover and 800,000 employees as of 2010, the Regions.ru news site reported, citing a member of the lower house of parliament’s health protection committee. A bill regulating the business has been stalled in parliament for the past five years.

About 20 percent of Russians have sought psychic help at least once in their lives, according to a nationwide poll by the independent Levada Center in 2010. The core client base of the psychic industry consists of women aged 25 to 55 looking for magic to bring success in love, news site Vesti.ru said at the time.