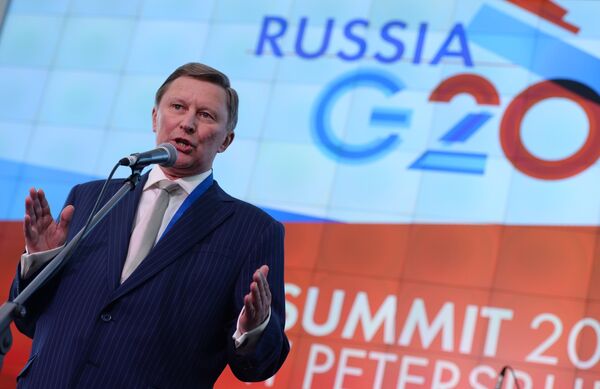 © Photo host agency
/
Go to the photo bank
Subscribe
The Kremlin chief of staff on Thursday dismissed as “hogwash” accusations that Russia was supplying chemical weapons and technologies to the Syrian government.

STRELNA, September 5 (RIA Novosti) – The Kremlin chief of staff on Thursday dismissed as “hogwash” accusations that Russia was supplying chemical weapons and technologies to the Syrian government.

“I heard the Pentagon chief saying that we supply chemical weapons to Syria and then correcting himself that no, not weapons but technologies to develop and produce it – well, this is, pardon me, hogwash,” the head of the Russian presidential administration, Sergei Ivanov, told journalists.

Ivanov, who previously headed the governmental commission on non-proliferation of weapons of mass destruction (WMD), said he was “surprised, if not to say shocked,” to hear the US accusation.

The issue has been repeatedly discussed by the presidents of both Russia and the United States, and “no accusations have ever been voiced against Russia that it contributes to the proliferation of WMDs.”

Speaking in testimony before the US congressional Foreign Affairs Committee, US Defense Secretary Chuck Hagel said Wednesday: “There’s no secret that the Assad regime has had chemical weapons, significant stockpiles of chemical weapons.”

In a statement released shortly after Hagel made his comments, Pentagon spokesman George Little attenuated the US defense chief’s remarks, saying the secretary “was referring to the well-known conventional arms relationship between Syria and Russia.”

Russia has long stated that it sells only conventional weapons to Syria, that these transfers are in strict compliance with international law and regulations, and that such weapons in no way modify the balance of power in the volatile region.