Putin Remark on Kerry 'Preposterous' – US 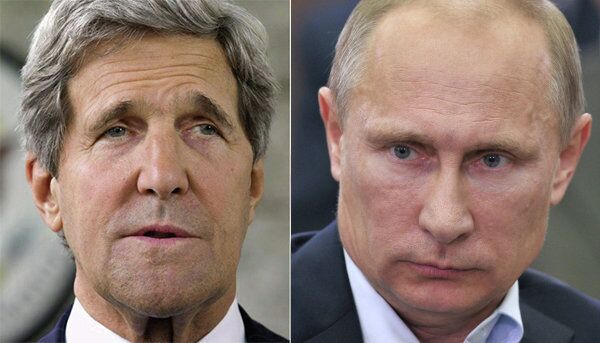 © AFP | RIA Novosti
Subscribe
Russian President Vladimir Putin’s assertion that US Secretary of State John Kerry “lied” about the influence of al-Qaida in Syria is “preposterous” and a mischaracterization of what America’s top diplomat actually said, the US State Department said Thursday.

WASHINGTON, September 5 (RIA Novosti) – Russian President Vladimir Putin’s assertion that US Secretary of State John Kerry “lied” about the influence of al-Qaida in Syria is “preposterous” and a mischaracterization of what America’s top diplomat actually said, the US State Department said Thursday.

Kerry is “not losing sleep after such a preposterous comment that was based on an inaccurate quote and was completely mischaracterized,” State Department spokeswoman Jen Psaki told a news briefing in Washington.

Putin on Wednesday accused Kerry of intentionally lying about al-Qaida’s level of involvement in the Syrian conflict.

He was apparently referring to Kerry’s testimony before the US Senate Foreign Relations Committee a day earlier in which Kerry said al-Qaida’s presence within the Syrian opposition – a presence routinely acknowledged by Kerry and other US officials – has not been increasing.

“He is lying and knows he is lying. It’s sad,” Putin said of Kerry during a meeting with the Kremlin’s human rights council.

During his Senate testimony, Kerry was asked by a senator whether it was “basically true” that the Syrian rebels had “become more infiltrated by al-Qaida over time.”

“No, that is actually basically not true. It’s basically incorrect,” Kerry replied.

Addressing the Kremlin’s human rights council on Wednesday, Putin framed Kerry’s comments as if the US official had said that there is no al-Qaida presence in the Syrian opposition.

“Secretary Kerry is, as you all know, a decorated combat veteran,” she said. “He’s had more than words aimed at him.”

US President Barack Obama has deployed Kerry to lobby lawmakers to support US military action against Syria as retaliation for an apparent chemical weapons attack outside Damascus on Aug. 21 that the White House claims was carried out by the government of Syrian President Bashar Assad.

Russia has repeatedly said outside military intervention is unacceptable in the Syrian civil war without support from the UN Security Council and has warned that overthrowing Assad could enable Islamist extremists to take power.

Updated with background and quotes from Psaki.