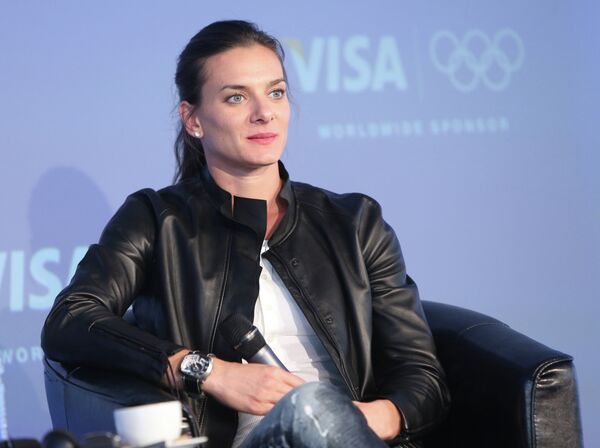 © RIA Novosti . Ekaterina Chesnokova
/
Go to the photo bank
Subscribe
Pole vault world record holder Yelena Isinbayeva will not be stripped of her symbolic role as an ambassador of the Youth Olympics following controversial comments in favor of Russia's law against “gay propaganda,” a source in the International Olympic Committee told R-Sport Thursday.

MOSCOW, September 5 (R-Sport) – Pole vault world record holder Yelena Isinbayeva will not be stripped of her symbolic role as an ambassador of the Youth Olympics following controversial comments in favor of Russia's law against “gay propaganda,” a source in the International Olympic Committee told R-Sport Thursday.

“I don’t think she will be stripped of her status,” the source said.

On Wednesday, IOC president Jacques Rogge said the organization would discuss Isinbayeva's removal at its congress this week after the pole vault world champion suggested there was no place in Russian society for gay people and that gay relationships threatened the country's future.

“We consider ourselves as traditional people, when men live with women," she said last month. On the ban on making pro-gay statements in the public presence of minors, she had said (speaking in non-native English): “If we will allow to promote and do all this stuff on the streets, we are very afraid for our nation.”

After creating a storm of protest from world sports commentators and gay advocacy groups alike, she later backtracked, saying she had been misunderstood.

There is no appetite within the IOC to punish Isinbayeva by removing her symbolic ambassador post, the source said.

“Rogge wasn’t as categorical as the media reported,” the source said. “This topic is heated up, but there is no controversy here, it’s just the way the media present it.”

The so-called “gay propaganda” legislation, signed into law by President Vladimir Putin in June, imposes fines of up to $3,000 for individuals promoting non-traditional relations to minors. It has prompted calls from activists around the world to boycott next year's Winter Olympics in Russia, which will be held in Sochi from February 7 to 23. Isinbayeva will be honorary mayor of one of the two Olympic villages in Sochi.

Russia's Interior Ministry, which controls the police, has vowed to enforce the law at the Olympics, but Putin said Wednesday gay people would face no discrimination at the Games or any of the other major sports events to be held in Russia in the coming years.