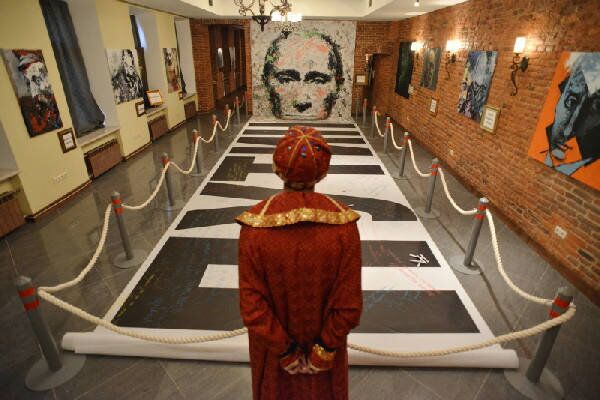 © Photo : Museum of Authority
Subscribe
Two art museums in St. Petersburg, which were closed after police seized a number of controversial works of art satirizing leading Russian politicians, have reopened for business.

They included a rainbow-colored portrait of St. Petersburg lawmaker Vitaly Milonov – who authored legislation banning promotion of homosexuality to minors – and a painting of President Vladimir Putin in a nightgown, touching the hair of Prime Minister Dmitry Medvedev, clad in a pushup bra and panties.

The painter of the portraits, Konstantin Altunin, told RIA Novosti after the raid that he was fleeing Russia and applying for asylum in Paris for fear of incurring the further wrath of the Russian authorities. The museum is now showing a different exhibition, its curator Donskoi said.

The paintings were confiscated to determine their compliance with the law, Donskoi said.

"Wrestling," the artwork taken from Tochka-G is a reproduction; the original hangs in the erotica museum's Moscow branch.

As of Wednesday, it is still there - though the museum's administration reported harassment by a group of ultraconservative Orthodox activists last week.

An administrator at Tochka-G's Moscow branch said that trouble with the authorities over the painting had been avoided last year by persuading them that the portrait was more complimentary to Putin than to Obama, The Moscow Times reported.

Obama is shown with only one penis in “Wrestling,” while the Russian president has two.