All of Tolstoy’s Works Are Online for Free – Descendant 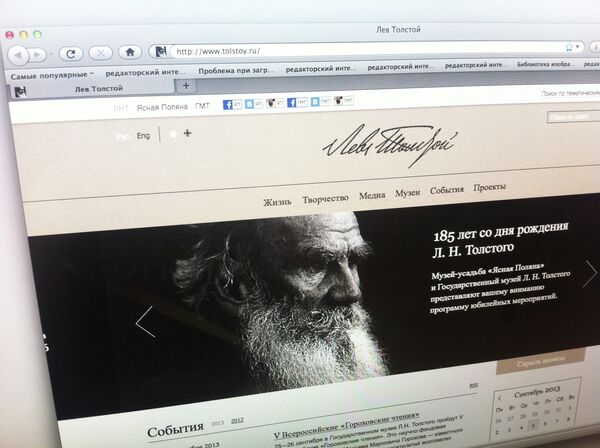 Celebrated Russian author Leo Tolstoy’s entire body of work – all 90 volumes – along with comprehensive biographical materials has been posted online and will be available for free, a descendant said Thursday.

MOSCOW, September 5 (RIA Novosti) – Celebrated Russian author Leo Tolstoy’s entire body of work – all 90 volumes – along with comprehensive biographical materials has been posted online and will be available for free, a descendant said Thursday.

“We wanted to come up with an official website that will contain academically justified information,” said Fyokla Tolstaya, the writer’s great-great-granddaughter, who works at Moscow’s Tolstoy museum. “Nowadays, it’s very important [to know] who posts information online.”

The Tolstoy.ru website will feature the 90-volume edition that was scanned and proofread three times by more than 3,000 volunteers from 49 countries, Tolstaya said.

All of his novels, short stories, fairy tales, essays and personal letters will be available online for free and be downloadable in PDF, FB2 and EPUB formats, recognized by most e-book readers and computers, she said.

Tolstoy’s epics “War and Peace” and “Anna Karenina” still top most of the lists of greatest novels of all time, and his controversial views on Christianity earned him excommunication from the Russian Orthodox Church and spawned a short-lived religious movement.

Russia is a well-known haven for online pirates and copyright violators, and Tolstoy’s books were among the first to become available in online libraries in the 1990s.

Tolstoy’s works were part of the obligatory high-school curriculum in the Soviet Union and Russia. Generations of Russian students have had to read the more than 800-page “War and Peace” – with boys preferring the war and girls the peace, according to a popular saying.