WikiLeaks ‘Cablegate’ Server up for Auction on eBay 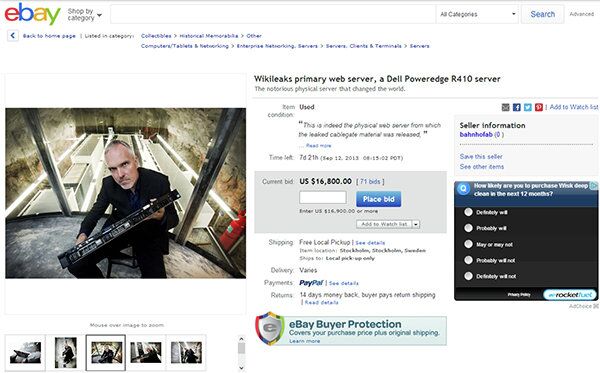 © eBay
Subscribe
The server from which the global whistleblower organization WikiLeaks released hundreds of thousands of US diplomatic cables and military reports is up for auction on eBay.

WASHINGTON, September 4 (RIA Novosti) – The server from which the global whistleblower organization WikiLeaks released hundreds of thousands of US diplomatic cables and military reports is up for auction on eBay.

“This is indeed the physical web server from which the leaked ‘Cablegate’ material was released, complete with hard drives, motherboard and everything,” Swedish Internet provider Bahnhof, which owns and rented out the server to WikiLeaks, said in a statement.

The hard drives on the Dell Poweredge R410 server have been erased, but that doesn’t make it any less of a collector’s item, Bahnhof said.

“The contents of the server indirectly led to the rounding up of leaker Bradley Manning and to Julian Assange's current condition,” the company said.

Manning was sentenced to 35 years in prison last month for handing some 700,000 US diplomatic and military documents to WikiLeaks, and Assange, the WikiLeaks founder, has been holed up in the Ecuadoran embassy in London since June 2012 to avoid extradition to Sweden, where he’s wanted for questioning about allegations of sexual assault and rape.

The high bid on eBay for the server as of Wednesday was $16,800. Bidding remains open until the end of next week.

But when the server first went on sale on Monday, WikiLeaks tweeted that it was not what Banhof said it was.

Bahnhof falsely claims that the server being auctioned was 'WikiLeaks primary web server'. It was not.

“Bahnhof falsely claims that the server being auctioned was WikiLeaks’ primary web server. It was not,” the whistleblowing group said on Twitter, where it also claimed the server that is up for sale was “not used for WikiLeaks Cablegate” but for leaking “the Iraq War logs.”

WikiLeaks also faulted Bahnhof for not seeking permission to auction the server.

Bahnhof did not seek permission to auction the WikiLeaks server or to use it for marketing purposes, or to send the proceeds to others.

But Bahnhof CEO Jon Karlung shot back on eBay, saying that it didn’t have to ask permission to sell something that it owns, and merely rented to WikiLeaks.

He also recalled the days, back in 2010, when ‘Cablegate’ was in full swing.

“It was a hectic time for our staff where the web server was heavily loaded and the traffic high. We optimized it during several nights to meet the demands,” he said. “There were no doubts that this server was the core of the operation.”

Bahnhof will provide the winning bidder with the hosting contract for the server, bearing Assange’s signature.

Proceeds from the auction will go to media rights group Reporters Without Borders and to Swedish free speech and online privacy group, 5th of July Foundation.