US Wary in Courting Russian Support for Syria Strike – Experts 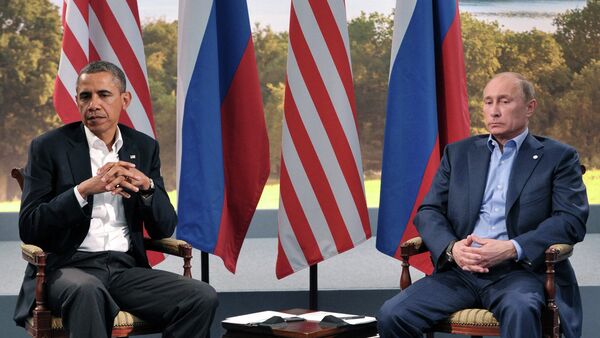 © Sputnik / Alexei Nukolsky
/
Go to the photo bank
Subscribe
US officials are likely cautious about disclosing to Russia comprehensive intelligence about an apparent chemical weapons attack in Syria and see little chance of convincing Moscow to accept outside military intervention in the civil war there regardless of the facts on the ground, US national security experts said Wednesday.

WASHINGTON, September 4 (By Carl Schreck for RIA Novosti) – US officials are likely cautious about disclosing to Russia comprehensive intelligence about an apparent chemical weapons attack in Syria and see little chance of convincing Moscow to accept outside military intervention in the civil war there regardless of the facts on the ground, US national security experts said Wednesday.

“I can’t imagine anyone in the US intelligence community thinking that any intelligence presented to the Russians would lead them to change their position,” said Steven Pifer, a former US State Department official who later served as US ambassador to Ukraine, told RIA Novosti.

Russian President Vladimir Putin said Wednesday that he would not rule out military action against Syria if “convincing” evidence emerges about the origins of the alleged attack, which US President Barack Obama has blamed on the government of Syrian President Bashar Assad, citing American intelligence assessments.

But officials in Moscow over the past week have repeatedly called US evidence implicating Assad insufficient, a position Putin reiterated Wednesday in an interview with Russian state television and The Associated Press.

“Even in the United States there are experts who believe that the evidence presented by the administration does not look convincing, and they do not exclude the possibility of a premeditated provocation [by the Syrian opposition] in an attempt to give its sponsors a pretext for military intervention,” Putin said.

Neither the White House nor the State Department responded to inquiries Wednesday seeking clarity on exactly how much US intelligence about the apparent Aug. 21 attack outside Damascus has been provided to Russia beyond a declassified assessment released by the Obama administration last week.

But it is “quite unlikely” that the United States has furnished the Kremlin with the full breadth of US evidence about the attack, which Washington claims resulted in more than 1,400 deaths, said Stephen Blank, a national security and Russia expert at the US Army War College.

“States just don’t give away their sources and methods,” Blank told RIA Novosti. “… I doubt very much there is any serious intelligence sharing on the incident with Moscow.”

Amid Moscow’s deep suspicion of US motivations and foundering bilateral ties – underscored by Obama’s decision to cancel a one-on-one meeting with Putin at this week’s G20 Summit in St. Petersburg – even convincing evidence of the Assad government’s complicity in the attack would probably not sway Putin to support military action, Blank and Pifer said.

“If the US intelligence community had a smoking gun with Assad’s fingerprints on it, the Russians would probably find some way to dismiss it,” Pifer said.

Putin on Wednesday appeared to concede that chemical weapons had indeed been deployed and called video footage of children killed in the attack “horrifying.” He also did not rule out military action should the Assad government be found responsible, but only through the framework of the UN Security Council, where Russia has veto power.

“Any other pretext or method which might be used to justify the use of force against an independent sovereign state are inadmissible and can only be interpreted as an aggression,” Putin said.

There is a recent precedent for US sharing of sensitive intelligence with Russia on national security issues, particularly in the wake of the Sept. 11, 2001, terrorist attacks and more recently following the April 15 Boston Marathon bombings allegedly carried out by two brothers with ties to Russia’s restive, mainly Muslim provinces in the North Caucasus, Pifer and Blank said.

Pifer said he was present at a briefing in 2002 or 2003 – during Putin’s first term as president – concerning US counterterrorism intelligence that had been designated “top secret” but also deemed releasable to Moscow.

It is possible that the United States disclosed to Russia an expanded intelligence assessment on Syria comparable to information provided to US lawmakers in the Obama administration’s push for Congressional support for military action, said retired Brigadier Gen. Kevin Ryan, head of the Defense and Intelligence program at Harvard University’s Belfer Center for Science and International Affairs.

“But I’m not sure that it would change the assessment of the Russian president and the Russian government about what’s going on in Syria,” Ryan told RIA Novosti.

Obama, meanwhile, said Wednesday that he will continue efforts to convince Putin to back military intervention in the Syrian conflict despite the current “wall” between the two leaders on the issue.

“Do I hold out hope that Mr. Putin may change his position on some of these issues?” Obama said at a news conference in the Swedish capital. “I’m always hopeful and I will continue to engage him.”

A White House official said Tuesday that while there is no plan for a formal bilateral meeting between Obama and Putin during this week’s G20 Summit, “we would expect the two presidents to have an opportunity to speak on the margins of the various meetings.”