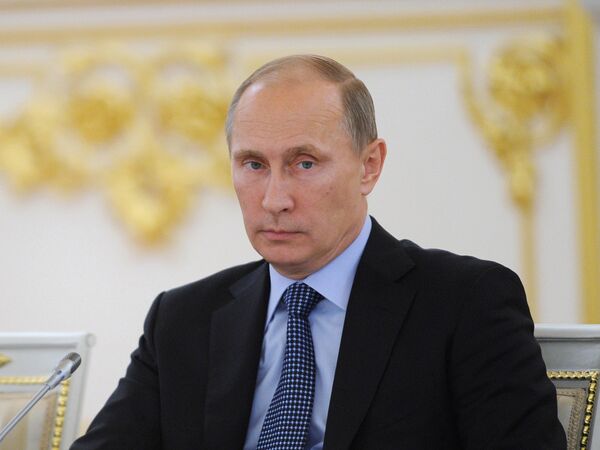 Russian President Vladimir Putin on Wednesday accused US Secretary of State John Kerry of “lying” in Congress by saying there was no al-Qaida in Syria.

MOSCOW, September 4 (RIA Novosti) – Russian President Vladimir Putin on Wednesday accused US Secretary of State John Kerry of “lying” in Congress by saying there was no al-Qaida in Syria.

“I watched the debates in Congress. A congressman asks Mr. Kerry: ‘Is al-Qaida there?’ He says: ‘No, we are telling you responsibly that they are not,’” Putin said in televised comments.

Putin added that the Syrian rebels’ “main combat unit is al-Nusra, an al-Qaida unit. They [the US] are aware of that. … He [Kerry] lied. And he knows that he lied. This is sad.”

During a US congressional debate on Tuesday, Kerry said there is a “threat of a chemical weapons cache falling into the hands of al-Nusra,” known as al-Qaida’s branch in Syria. He did not directly say that al-Qaida is in Syria.

Also, Kerry said at an August 15 meeting with Iraqi Foreign Minister Hoshyar Zebari in Washington that there were “many al-Qaida leaders now operating in Syria,” according to the transcript of the meeting posted on the department of state’s website.

Putin said Wednesday, at a discussion of the Syria crisis with his presidential human rights council, that it was beyond the authority of the US Congress to sanction a military strike on Syria.

“What are they sanctioning? They’re sanctioning aggression, because anything outside the UN Security Council framework is aggression, except for self-defense. But, as we know, Syria is not attacking the US, so this isn’t about defense,” Putin said. “This is inadmissible in principle.”

Putin pointed out that the United States expected that the Syrian rebels would defeat the pro-government troops and US military intervention on the ground would not be needed. But, he said, the Syrian government just a short time ago appeared likely to win the war.

“Why do they [the US] say that not a single US soldier will appear in Syria? Because they think this is unnecessary, that those militants will cope on their own. What they need is support by means and equipment they don’t have – planes, missile equipment. This should be given to them. Well, they’ll get it, right now,” he said.

The Russian president also questioned the reliability of US evidence of the Syrian regime’s alleged involvement in conducting a chemical weapons attack late last month that killed civilians. Putin said it was absurd to assume that the Syrian government would have decided to use such weapons at a point when it was about to defeat its opponents.

The United States has said it is confident that an August 21 chemical weapons attack in the Damascus suburbs was carried out by the government of Syrian President Bashar Assad, and US President Barack Obama is lobbying US lawmakers to support punitive military action against Syrian state targets in response.

(This story has been revised to show that Kerry did not directly say in the Congress debate Tuesday that al-Qaida is in Syria, referring only to its branch there, and that he had admitted the presence of al-Qaida in Syria earlier.)