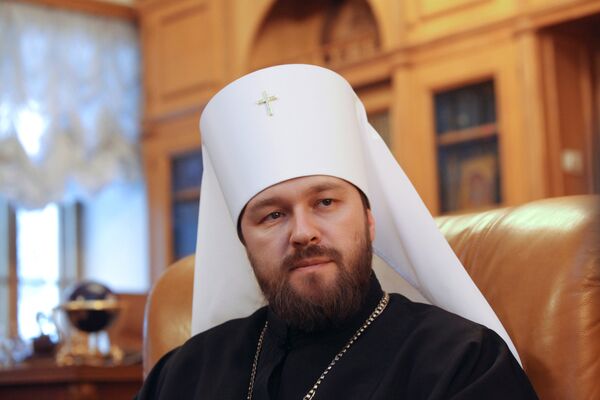 “I believe that this law is necessary, and it was adopted in a very timely manner,” Metropolitan Hilarion, the head of the Moscow Patriarchate’s Department for External Church Relations said in a Friday interview with Italian media portal AsiaNews. “Moreover, I think that the same laws should be brought in other countries, instead of those norms that have been introduced in a number of European Union countries, where same-sex couples are given the right to adopt children,” he added.

Hilarion said Western countries’ polices on the issue were “self-defeating” because same-sex unions lead not only to the destruction of the family but “sign the death warrant of whole nations,” in demographic terms.

“There is an acute demographic crisis [in] many European countries under the influence of secular ideologies, advertising, and a consumer-driven attitude to life,” Hilarion said. “They should take an example from Russia…We want strong families to be revived in Russia, so that our families have many children.”

Russia’s so-called “gay propaganda” law came into force at the end of June. The law sets out fines for disseminating information to children on “non-traditional sexual relationships” of 5,000 rubles ($150) for individuals to 1 million rubles ($33,000) for legal entities. Media outlets found in violation of the law may also be forced to discontinue their activities for 90 days.

The law has provoked widespread criticism abroad, with some gay activists saying it should be met with a boycott of the 2014 Winter Olympic Games, to be held in the Russian city of Sochi in February.

Recent polls in Russia show, however, that a majority of the nation supports the new law, reflecting Russian society’s predominantly conservative attitude toward homosexuality.