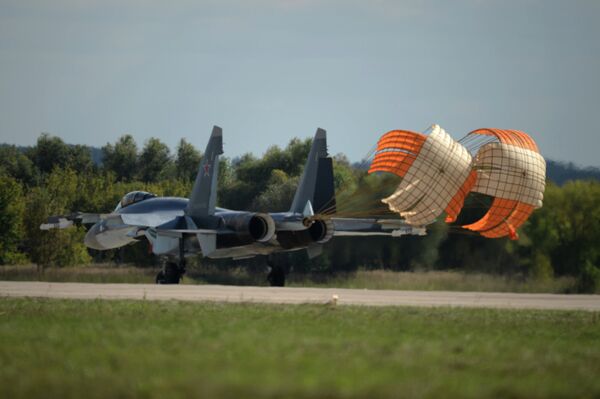 “During the flights, pilots of the famed aerobatics team performed a series of aerial stunts and familiarized themselves with unique super-maneuverable capacities of the Su-30SM fighter jet. They spoke highly of the plane’s performance,” said Alexander Uvarov, a spokesman for the plane’s manufacturer, the Irkut Corporation.

The test flights were performed during the fourth day of the MAKS-2013 air show under way in the city of Zhukovsky just outside Moscow. On Friday, the first day when the event was open to public, more than 69,000 people visited the show.

The Swifts, who currently fly the MiG-29 fourth-generation fighter jets, will receive Mig-35 fighters and Yak-130 combat trainers. The Russian Knights, who now have Su-27 in service, will fly Su-30 and Su-35 jets instead.

The Su-30SM is the latest development of the twin-seat Su-30 jet fighter family, a derivative of the long-serving single-seat Sukhoi Su-27, one of the air force's most important warplanes.