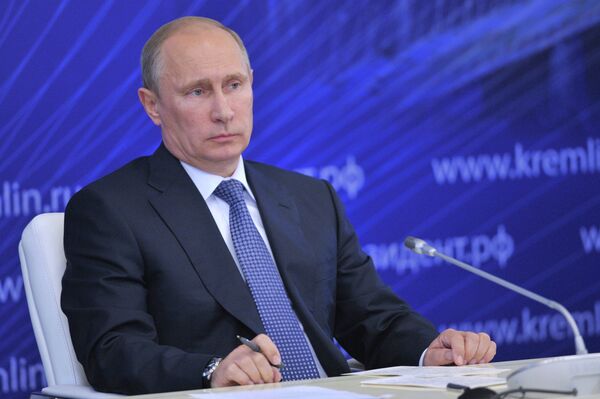 Russian President Vladimir Putin said on Saturday that allegations about the Syrian government using chemical weapons against civilians were a “provocation.”

“I am sure this was no more than a provocation by those looking to drag other countries [into the conflict] and obtain support of powerful international player, particularly the United States,” Putin said about the chemical attack that reportedly killed hundreds last week.

The United States said that the forces of Syrian President Bashar Assad were behind the attack, but these claims require solid proof, Putin said, marking the first time he weighed in on the topic.

“If they say that the [Syrian] governmental forces used weapons of mass destruction…and that they have proof of it, let them present it to the UN inspectors and the [UN] Security Council,” Putin said about the United States.

“Claims that the proof exists, but is classified and cannot be presented to anybody are below criticism. This is plain disrespect for their partners,” Putin said during a trip to the far eastern city of Vladivostok.

The White House released on Friday a report blaming Assad’s regime for the attack, which cited “human, signals and geospatial intelligence,” as well as open source materials such as social media reports and videos of the alleged attack. The report explicitly stated that it omitted certain classified evidence, which was only made available to the US Congress.

Putin said Saturday that Russia denounced the use of chemical weapons and was ready for “consolidated participation in drafting measures to oppose such acts.”

He also denied discussing possible US military strikes on Syrian targets with his US counterpart Barack Obama on the phone.

But Putin said he was hoping to take up the Syrian issue with Obama during the upcoming G20 summit in Russia’s St. Petersburg on September 5-6.

Obama has explicitly blamed Assad for the attack and threatened missile and bomb strikes against selected Syrian targets in retribution for using weapons of mass destructions. He denied plans for a ground invasion of Syria or Assad’s overthrow.

Official Damascus has called the attacks a provocation by rebels it is battling since 2011.

A UN investigative team was dispatched on the site of the attack and is expected to present its findings by mid-September, but its mandate is limited to establishing whether the attack took place, not naming the guilty parties.

The British parliament ruled Thursday against supporting a possible US military operation in Syria. Putin said Saturday he was “astonished” by the move, which, he added, was made by people “motivated by nation’s interests and common sense.”

More than 100,000 died in internal strife in Syria since the conflict’s outbreak, according to UN figures.

(This article has been updated to include Putin's direct quote on provocation in second graf.)