US Strike on Syria Inadmissible, Even if ‘Limited’ - Moscow 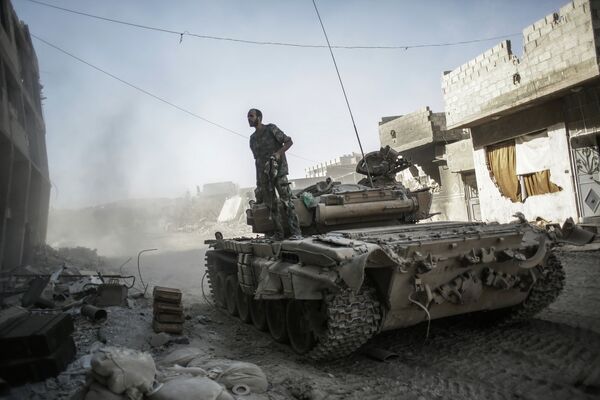 © RIA Novosti . Andrei Stenin
/
Go to the photo bank
Subscribe
A military strike on Syria not sanctioned by the UN Security Council would be inadmissible no matter how “limited” it is, the Russian Foreign Ministry said on Friday.

MOSCOW, August 31 (RIA Novosti) - A military strike on Syria not sanctioned by the UN Security Council would be inadmissible no matter how “limited” it is, the Russian Foreign Ministry said on Friday.

US President Barack Obama said earlier in the day that a potential military strike on Syria would be a “limited” operation aimed at punishing the Syrian government for a chemical weapons attack it allegedly carried out last week.

“Any unilateral military sanction bypassing the UN Security Council, no matter how “limited” it is, will be a direct violation of the international law, [it will] undermine the possibility to solve the conflict in Syria by political and diplomatic means, [and] bring about a new round of confrontation and casualties,” Russian Foreign Ministry Spokesman Alexander Lukashevich said in a statement late on Friday.

He said that even some of US allies suggest that all decisions on Syria should be postponed until a team of UN chemical weapons experts completes its work in the country. The same proposal had earlier been voiced by UN Secretary General Ban Ki-moon.

“Threats of striking Syria are being issued instead of implementing the decisions of the G8 summit in Lough Erne [and] subsequent agreements to provide the UN Security Council with a comprehensive evaluation by UN experts, who investigate the possible use of chemical weapons in Syria,” the spokesman said.

Britain backed the US incursion into Iraq in 2003 to overthrow Saddam Hussein, but the British parliament on Thursday rejected military involvement in Syria.

At the same time, Turkey, a key US ally in the region and Syria’s neighbor, said a "limited" action against Syria will not be enough to satisfy Ankara and a full-fledged military intervention in Syria, similar to the one in Kosovo in 1999, is needed.

"A limited military action will not satisfy us. It [the intervention] should be like in Kosovo," Turkish daily Hurriyet quoted Prime Minister Recep Tayyip Erdogan as saying.

The UN secretary general cut short his official visit in Europe on Friday and returned to New York for consultations on Syria with UN members. He said on Friday that the study of data and samples collected by the UN investigators on the site of the alleged attack might take about two weeks, Reuters reported citing diplomatic sources.

The UN team, deployed in Syria last Sunday, is set to leave the country on Saturday. A high-ranking team member, UN High Representative for Disarmament Affairs Angela Kane, is expected to brief the UN chief on the work of the mission later that day.

Earlier on Friday, the White House released a declassified intelligence assessment of an apparent Aug. 21 chemical weapons attack in the Damascus suburbs, which the administration asserts “with high confidence” was carried out by the government of Syrian President Bashar al-Assad.

The report states that 1,429 people were killed in the alleged assault, including at least 426 children, though it said that assessment “will certainly evolve as we obtain more information.”

The Syrian authorities have repeatedly rejected all accusations. The country’s Foreign Ministry said in a statement read out on State TV on Friday that the US report was "entirely fabricated."

"What the US administration describes as irrefutable evidence... is nothing but tired legends that the terrorists have been circulating for more than a week, with their share of lies and entirely fabricated stories," Agence France-Presse quoted the statement as saying.