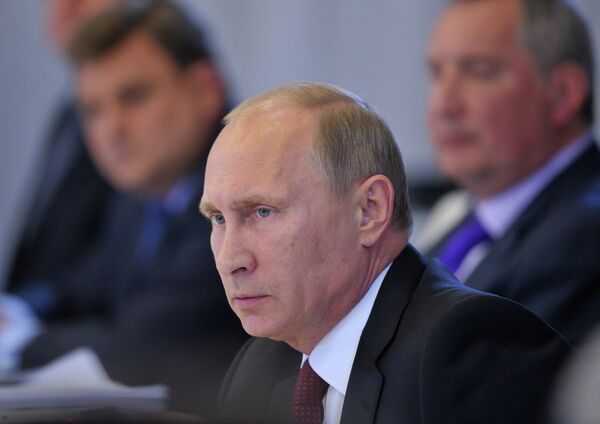 © RIA Novosti . Alexei Nikolskiy
/
Go to the photo bank
Subscribe
Russian President Vladimir Putin on Friday called for Russians considering buying a ship to buy it from a domestic manufacturer, and for Russian shipbuilders to keep up with the standards of their competition.

VLADIVOSTOK, August 30 (RIA Novosti) – Russian President Vladimir Putin on Friday called for Russians considering buying a ship to buy it from a domestic manufacturer, and for Russian shipbuilders to keep up with the standards of their competition.

“Our shipbuilding industry should provide high-quality and competitive products,” Putin said at a meeting on commercial shipbuilding development in the far-eastern city of Vladivostok, the Kremlin said in an online statement.

“But Russian clients should also bear in mind that … they should order [vessels] at Russian shipyards instead of providing jobs and sending taxable income abroad,” the president said. “Don’t forget where you work.”

The president also said Russian shipbuilding companies should establish technology partnerships with the world’s leading manufacturers, expand the range of their products and build new types of vessels.

As an example, Putin cited the construction of the Zvezda shipyard in the Russian Far East, set to manufacture ice-class vessels and gas tankers. A South Korean investor pulled out of the project last year, but other foreign investors may be asked to join soon.

Putin said documents on the sale of Zvezda to a private consortium should be drafted by the end of September. The shipyard is currently 100 percent owned by Russia's state United Shipbuilding Corporation.

Earlier this year, Putin criticized the naval shipbuilding industry for poor performance. In May, he fired the head of the United Shipbuilding Corporation, Andrei Dyachkov, after just 10 months on the job, and warned the new management that he expected a major shakeup in the sector.