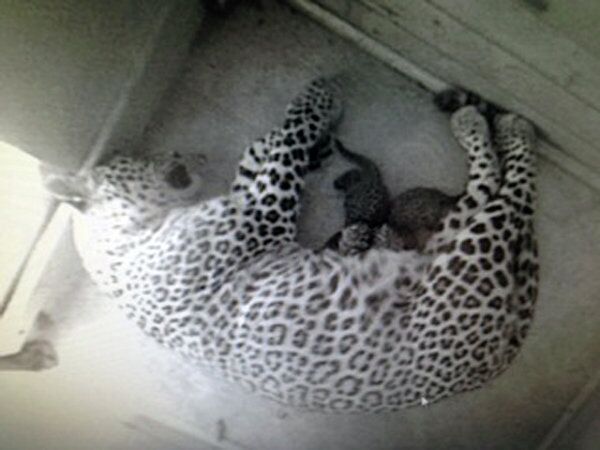 © Ministry of Natural Resources and Environment of the Russian Federation
Subscribe
An endangered Persian leopard gave birth to two cubs in the Sochi National Park in southern Russia, the World Wide Fund for Nature said Friday.

The mother – for whom it was her first litter – abandoned one of the cubs, but that newborn was rescued and nurtured by park staff who hope to replenish the North Caucasus’ now-extinct wild Persian leopard population, the WWF said in a statement.

The luckier of the two cubs, along with two others born to another female last month, is tentatively scheduled for release into the wild in 2015, Deputy Prime Minister Sergei Ivanov, who oversees the government’s leopard conservation effort, said Friday.

The abandoned cub will never be able to live in the wild but will be used for breeding, the WWF said. There are only 108 Persian leopards, descended from less than a dozen forebears, at zoos and breeding centers around the world, and the population is in need of new genes.

Of the three leopard couples brought to Sochi’s Persian leopard reintroduction center since it opened in 2009, only one is still able to produce offspring, the WWF said. That couple took about two years to get along – mainly because the young female cat mistook the male’s sexual advances for attacks.

Between 870 and 1,290 Persian leopards still live in the wild in Iran, Afghanistan and Turkmenistan, according to the International Union for Conservation of Nature. In Russia’s Far East lives a separate subspecies of Amur leopards, whose estimated population is 50, up from 30 in 2007.