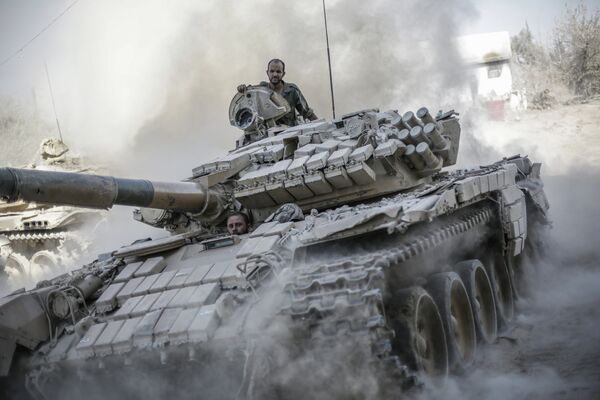 MOSCOW, August 29 (RIA Novosti) – Russian President Vladimir Putin and his Iranian counterpart, Hassan Rouhani, have discussed the situation in Syria, condemned the use of chemical weapons, and called for a political settlement, the Kremlin press service said late Wednesday.

In a telephone conversation initiated by the Iranian side, “amid ongoing calls for foreign military intervention in the Syrian conflict,” the two presidents said the use of chemical weapons is unacceptable, no matter who uses them, and stressed the need to search for a solution by purely political and diplomatic means, the press service said in a statement.

Rouhani said Tehran strongly condemns any use of chemical weapons anywhere, but warned against jumping to conclusions before all aspects of the alleged attack have been clarified, Press TV said. He reportedly expressed concern over reports that the West is preparing a war against Syria and warned that any military intervention could destabilize the entire Middle East region.

Western powers are considering armed intervention in the two-year civil war after hundreds of people were killed last week in the Syrian capital Damascus in an apparent nerve gas attack that the Syrian opposition claimed was carried out by government forces. The Syrian government quickly denied the allegations and said it had evidence of rebel groups using chemical weapons.

A UN team of chemical weapons investigators started working in Damascus last week. It is expected to visit three sites of alleged chemical weapons attacks, including the one last week in Ghouta, an eastern part of the city.

The UN Security Council has so far not authorized any military intervention in the Syrian crisis. Moscow, along with Beijing, previously vetoed three UN Security Council resolutions condemning Syrian President Bashar Assad's government. Russia has urged all parties in the conflict to use diplomatic means to resolve it.

US President Barack Obama said Wednesday that he had not yet decided what Washington’s response would be to the alleged use of chemical weapons in Syria.