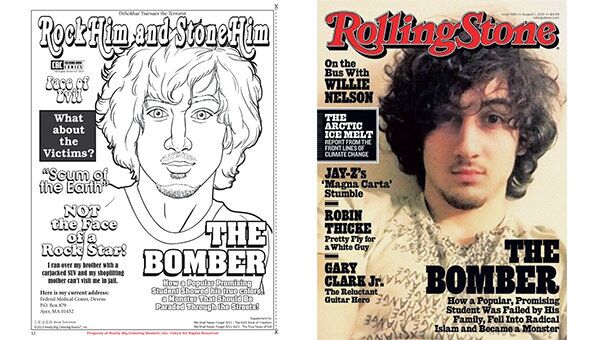 © Handout/Really Big Coloring Books
Subscribe
When a US publisher of children’s books received thousands of phone calls and emails from parents angered by the controversial July “Rolling Stone” cover of Boston marathon bombing suspect Dzhokhar Tsarnaev, he decided to spoof the storied music and investigative magazine to teach children about terrorism.

WASHINGTON, August 28 (RIA Novosti) – When a US publisher of children’s books received thousands of phone calls and emails from parents angered by the controversial July “Rolling Stone” cover of Boston marathon bombing suspect Dzhokhar Tsarnaev, he decided to spoof the storied music and investigative magazine to teach children about terrorism.

This week, Really Big Coloring Books, which usually produces “books about very fun things like ABCs, zoo animals, butterflies and horses,” released 1,200 copies of a new comic book, featuring a line drawing of Tsarnaev on the back cover under the headline “Rock him and Stone him.”

The cover also called Tsarnaev, who has been charged with murder and the use of a weapon of mass destruction, “Scum of the Earth” and the “face of evil.”

Within hours, the comics were “all gone, every single one of them,” publisher Wayne Bell told RIA Novosti Wednesday, adding that his St. Louis, Missouri company is gearing up to produce more copies.

It was parents’ outrage over the “Rolling Stone” cover of Tsarnaev that pushed Really Big Coloring Books to produce its comic book.

The week “Rolling Stone” ran a picture on its cover of Tsarnaev with tousled hair, sleepy eyes, and looking like the rock stars that usually get their pictures on the cover of the magazine, “We got probably 3,000 emails, phone calls and comments from people saying something derogatory about that cover,” Bell said.

“Lots of people were insulted by it, so we thought we’ll come up with our own version and a new product line,” Bell added.

The publisher didn’t stop at Tsarnaev, inside the same comic book there is a cartoon of a fish shunning “evil trash” at the bottom of the sea that turns out to be the remains of Osama bin Laden.

Another page has a black and white line drawing of Bradley Manning, the US Army private sentenced this month to 35 years in prison for leaking hundreds of thousands of classified documents to WikiLeaks.

Bell said Manning was included in the comic book because he had sold “American information to very bad people.”

The book also includes “an honest and engaging letter of declaration to Imams in America,” asking them, among other things, to “help rid America of radical Islam.”

But the comic is not anti-Muslim, Bell insisted.

The book is targeted at adults who want to explain acts of terror and the people who commit them to their children, and not at what Bell called “little bitty kids.”

Some kids will see it without their parents there to explain the contents to them, but “it’s no worse than the evening news,” he said.

Bell’s company has also published a comic book called “Being Gay is OK,” and sent a copy of it to Russian President Vladimir Putin, who in June signed a controversial law banning the promotion of “non-traditional relationships” toward minors.

The Kremlin has not acknowledged receipt of the comic, which was sent two weeks ago by first class US mail, Bell said.