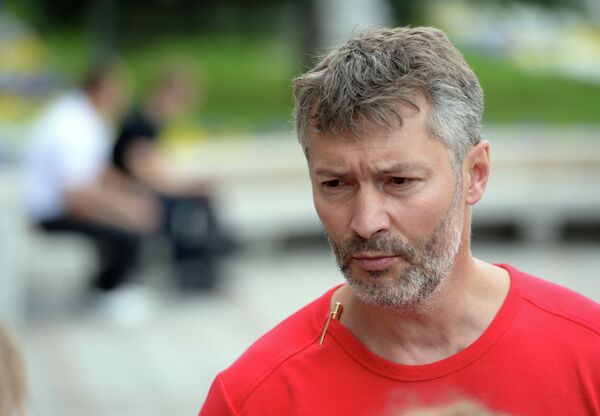 © RIA Novosti . Pavel Lisytsin
/
Go to the photo bank
Subscribe
Russian prosecutors said Wednesday they would investigate alleged ties between “ethnic criminal groups” and a popular anti-drug campaigner who is running for mayor of Russia’s fourth-largest city against a Kremlin-backed official.

MOSCOW, August 28 (RIA Novosti) – Russian prosecutors said Wednesday they would investigate alleged ties between “ethnic criminal groups” and a popular anti-drug campaigner who is running for mayor of Russia’s fourth-largest city against a Kremlin-backed official.

A talk show broadcast late Tuesday on nationwide television claimed that Yevgeny Roizman would appoint several criminal underworld figures as city officials if he wins the September 8 election in Yekaterinburg, the administrative capital of the industrial and oil-rich Urals region.

The regional prosecutor’s office is “checking” the allegations of Roizman’s “illegal activities” made on Channel Five’s “Moment of Truth,” according to a statement on its website. Neither the statement nor the television program offered any specifics about the nature of the activities.

The host and guests of the show – which mingled still images of Roizman, his activists, city views, syringes, metal bars and alleged mobsters, all voiced over in dramatic tones – claimed that several mafia kingpins gathered at a Yekaterinburg cafe on July 18, the day before Roizman announced his mayoral ambitions, to discuss the division of power after his victory.

“Pretty much all the ethnic criminal elite gathered,” said Konstantin Stroganov, a regional police colonel in charge of fighting organized crime. “Mostly Georgians, Georgian thieves-in-law,” he said, referring to a caste of top criminals in the former Soviet Union.

“They were all discussing what to do in order to seize power in the city through the election,” one voice-over said, adding that the crime bosses wanted to get closer to “the dough” and that the nephew of a Georgian-born mafia boss gunned down in Moscow in January wants to control “cash flows” if Roizman gets elected.

Stroganov also claimed that Roizman’s criminal connections date back to the early 1980s, when he served part of a two-year jail term for theft, fraud and possession of cold arms.

Roizman, who is running for mayor as a member of billionaire Mikhail Prokhorov’s Civil Platform party, could not be immediately reached for comment Wednesday.

Writing in his LiveJournal blog, he did not directly address the allegations of mob ties, but suggested the show was part of a smear campaign and cast doubt on the integrity of its controversial host, Andrei Karaulov.

“Does he take us, residents of Yekaterinburg, for idiots?!” the 50-year-old Roizman wrote, implying also that Karaulov is serving particular political interests: “Never in my life have I used the service of prostitutes. Why should I make an exception for Karaulov?”

Roizman, who served a term in Russia’s lower house of parliament in 2003-2007, has claimed that his attempts to re-enter the State Duma in 2007 and 2011 were stymied by the Kremlin for his overly independent political views.

This year, Roizman has had a number of run-ins with law-enforcement agencies.

In May, investigators opened a criminal case against his clinic over allegations of patients’ unlawful “imprisonment” and, earlier this month, Roizman said police seized 45 icons from his museum and raided a restoration workshop that worked with it. An art historian by education, Roizman owns a museum of icons by Old Believers, a splinter Russian Orthodox Christian group whose followers helped settle Siberia and the Urals in the mid-17th century.

In July, the Federal Security Service, Russia’s main KGB-successor agency, said it launched an investigation into the “disclosure of state secrets” after Roizman filed a complaint about a former prosecutor who allegedly had printouts of his phone conversations. FSB officials were not immediately available Wednesday to explain the case.

A 700-person survey commissioned by Roizman and reported Monday by his campaign manager’s news website put his approval rating among the city’s residents at 27.8 percent, nearly double that of his main opponent, Deputy Governor Yakov Silin.

But more independent assessments were not readily available, and Silin’s campaign headquarters told the Gazeta.ru website earlier this month that their data suggest Roizman is popular as a personality, not as a candidate.