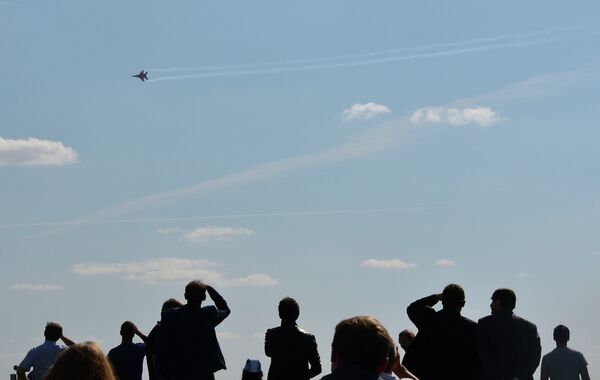 Russia’s MiG fighter jet maker has signed two additional contracts with India worth a total $55 million, the corporation said Wednesday. They are part of a general contract with India’s air force.

Russia will deliver six MiG-29K Fulcrum “generation 4++” fighters to India this year as part of a 2010 contract for 29 planes worth $1.5 billion, MiG CEO Sergei Korotkov said at the MAKS-2013 international air and space show.

In a groundbreaking deal, Russia is to deliver Mi-17 military transport helicopters to Cameroon, a spokesperson for Russian Technologies said Wednesday.

The deal was signed by Cameroon’s Defense Ministry and Russia’s state-run arms exporter Rosoboronexport, which is part of Russian Technologies.

“This is the first contract as part of military technology collaboration between Russia and Cameroon,” Rosoboronexport CEO Anatoly Isaikin said in a statement. It was not immediately clear how many helicopters Russia would deliver under the contract or when.

In his statement, Rosoboronexport’s CEO explicitly identified expanding exports to countries in Africa as a priority, and said it is seeking to renew ties with Botswana, Ghana and Equatorial Guinea.

In February a Russian delegation headed by Foreign Minister Sergei Lavrov and including the deputy director of the Russian Federal Service for Military and Technical Cooperation under Russia’s Defense Ministry traveled to Cameroon and held a series of meetings about bilateral cooperation.

Eleron-3SV is a modernized unmanned aerial vehicle that was approved for service with the Russian Armed Forces earlier this year. The system is about “five times cheaper” compared to its Western analogues, Pobezhimov said.

Ukraine’s Antonov aircraft maker has handed over a third An-158 passenger airliner to Cuba and signed a contract for the delivery of three more, Ukraine’s UNIAN news agency reported Wednesday.

The delivery of the other three aircraft has been planned for next year, Echevarria said, adding that they would help boost the tourist flow to and from Cuba.

The An-158 is made by Ukraine, but about 60 percent of its components are Russian-produced, which is why Russia has an interest in facilitating such deals, Russia’s minister for industry and trade, Denis Manturov, told a group of aviation students in Moscow in February.

The aircraft also uses components that are French, German and US made, with the share of this last being under the 10 percent cutoff point that would prevent it being sold to Cuba under US sanctions.

Alexei Fedorov, managing director of aviation projects at Rostec, hailed the agreements as “a landmark opportunity for the Q400 NextGen aircraft program.”

Mike Arcamone, president of Bombardier Commercial Aircraft, was quoted by the WSJ as saying the company had identified Russia as “key to our growth and sustainability.”

Airbus and the Rostec Group-affiliated RT-Biotekhprom signed a collaboration deal to speed up the development and commercialization of sustainable fuels for aviation.

“The partnership is aimed at assessing suitable feedstocks to comply with ecological, economic and social sustainability criteria. The sustainability analysis will be managed by Airbus in close collaboration with RT-Biotekhprom,” Airbus said in a press release.

Airbus will provide support to RT-Biotekhprom in ensuring that the fuel produced meets international aviation standards, the company said.

“We are delighted to be working with our Russian partners RT-Biotekhprom,” said Christopher Buckley, executive vice president of sales at Airbus. “Sustainable fuels are a crucial part of the roadmap to meet the aviation industry’s ambitious CO2 targets.”

"The project will help us to improve the understanding of aviation Biofuels commercialization in Russia, identify the opportunities and challenges, and evaluate the possibility of social, economic, market and technology change and its cost, obstacles and challenges,” RT-Biothekhprom CEO Sergei Krayevoi said, according to the Airbus press release.