US, Russia Start Sochi Olympic Rivalry with Battle of the Hockey Jerseys 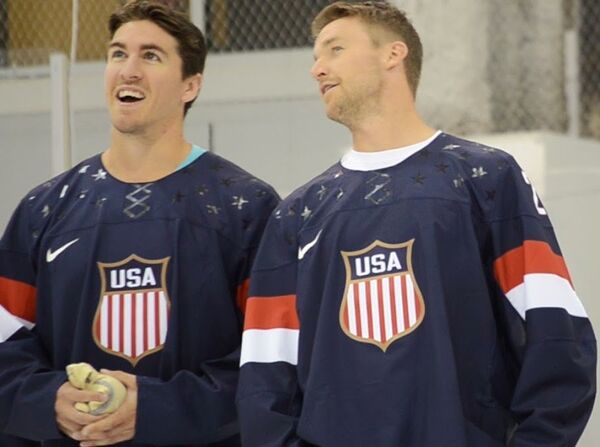 © RIA Novosti . K. Zeitvogel
Subscribe
The US men’s Olympic hockey team had more than the weight of expectation on its shoulders Tuesday as the squad unveiled the high-tech jerseys with hidden extras that players will wear on the ice at the Sochi Winter games next year.

ARLINGTON, Virginia, August 27 (by Karin Zeitvogel for RIA Novosti) – The US men’s Olympic hockey team had more than the weight of expectation on its shoulders Tuesday as the squad unveiled the high-tech jerseys with hidden extras that players will wear on the ice at the Sochi Winter games next year.

Crafted by US sports giant Nike from recycled polyester – around 17 shredded plastic bottles’ worth per jersey – the tops add a hint of green to the patriotic red, white and blue of US sports teams, but the jersey’s environmental friendliness isn’t the only unseen detail of the shirts.

An abbreviated version of the last, rousing line of the first verse of the US national anthem “The Star Spangled Banner” – “Land of the free, home of the brave” – is inscribed in white capital letters inside the neckline of the jerseys, and matte/shine stars on the shoulders and bold striping recall the American flag.

The jersey could almost be seen as an answer to the bright red Russian Olympic hockey jersey, which was introduced to the public Monday.

Like the American jersey, Russia’s has symbols of national pride and athletic greatness woven into its fabric.

The brilliant red jersey prominently features a golden coat of arms and the word "Russia," written in the Cyrillic alphabet, on the chest – symbolizing national pride, the Russian Ice Hockey Federation wrote on its website.

“White, blue and red stripes on the top of the sleeves pay tribute to the Russian flag… Four gold stars on each shoulder recall the eight Olympic gold medals” that Russia has won at Olympic Games, including when it was part of the Soviet Union, the federation says on its website.

The US jersey can celebrate far fewer Olympic victories, but does feature the years that the United States won both of its men’s hockey gold medals – 1960 and 1980 – on the right sleeve. Both those Winter Olympic Games were held in the United States, and at both, the American men’s hockey team beat the squad from the Soviet Union.

At next year’s games in the Russian Black Sea resort of Sochi, the strong Russian team will have the home rink advantage, but the US team is also seen as a top contender for the gold medal.

That stands in sharp contrast to the expectations placed on the US team that went to Vancouver in 2010. US hockey was said to be in transition at the time, and even the general manager of the Olympic team said it had little chance of winning a medal.

The hockey team went on to defy expectations and win a silver medal, skating all the way to the final, which it lost in a nail-biting and, for Americans, tear-jerking penalty shootout to the home team, Canada.

“We are looking at a group that has largely been together and succeeded as a young group in 2010, being one goal away in Vancouver from winning a gold medal,” Dan Bylsma, the coach of the US Olympic hockey team, told reporters at an event in Arlington, Virginia Tuesday to show off the new Team USA Hockey jersey.

But he cautioned Americans not to get their hopes up too high. “We’re going to foreign soil, we’re going overseas… a place where we haven’t really done well in Olympic games,” he said.

That said, Bylsma has rich pickings for the team, with any one of the goaltenders who were selected to train with Team USA capable of winning “every game for you,” he said.