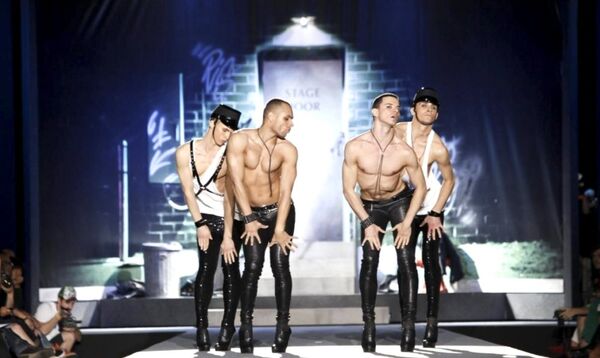 © photo handouts from the Kazaky band's official website
Subscribe
International
India
Africa
Russian Cossacks rallied, yelled homophobic slurs and sang their traditional song on Saturday in an Urals city to protest a show by their high-heeled and androgynous namesakes from a Ukrainian band.

MOSCOW, August 25 (RIA Novosti) – Russian Cossacks rallied, yelled homophobic slurs and sang a traditional song on Saturday in an Urals city to protest a show by their high-heeled and androgynous namesakes in a Ukrainian band.

Kazaky, or "Cossacks," is a Ukrainian all-male synth-pop quartet whose members wear stiletto shoes and skin-tight clothes – sometimes reduced to nothing but leather pants or underwear. The band, which is best known for dancing in Madonna’s 2012 music video "Girl Gone Wild," has recorded two albums and released several music videos with somewhat homoerotic choreography.

A group of Russian Cossacks staged a noisy protest near the Q2 nightclub in the city of Perm, yelling threats and homophobic insults and urging the club’s owners to cancel a Kazaky show, the band’s manager Alexei Mironichev said.

But the show went on because “we are used to such pranks,” Mironichev told RIA Novosti. “The threats were nothing special,” he said in a telephone interview. “And we broke no rules that would have necessitated canceling the show.”

In a video posted on the website of Russian tabloid lifenews.ru, two dozen men in Cossack uniform yell, “Get out of Perm!” and sing Cossack songs near the Q2 nightclub. One of them said that the show’s organizers should have to pay a fine for breaching the recently-adopted anti-gay law.

The law banning the promotion of "non-traditional sexual relationships" to minors was signed by President Vladimir Putin in June. While the law’s proponents in Russia argue it is aimed at protecting children from harmful influences, critics allege the move is part of a broader crackdown on Russia’s gay community.

In 2011, Kazaky had to cancel their show in a village in the southern Rostov region because local Cossacks threatened to use violence against Kazaky. Rostov is one of the strongholds of Cossack traditions in Russia.

Some Russian Cossacks are notoriously homophobic: In recent years, men in Cossack uniform have frequently taken part in the violent dispersion of gay rallies in Moscow and other Russian cities, brutally attacking LGBT activists and their supporters.

Before the 1917 Bolshevik revolution, Cossack paramilitary communities were instrumental in expanding czarist Russia’s frontiers in Eastern Europe, Siberia and Central Asia. They were also known as stalwart monarchists and anti-Semites, and their participation in pogroms contributed to mass Jewish migration to the West.

In the Soviet era, Cossacks were purged and widely persecuted for their opposition to the Communist reforms. Cossack groups mushroomed after the 1991 Soviet collapse, but some critics have dismissed the revival as theatrics.