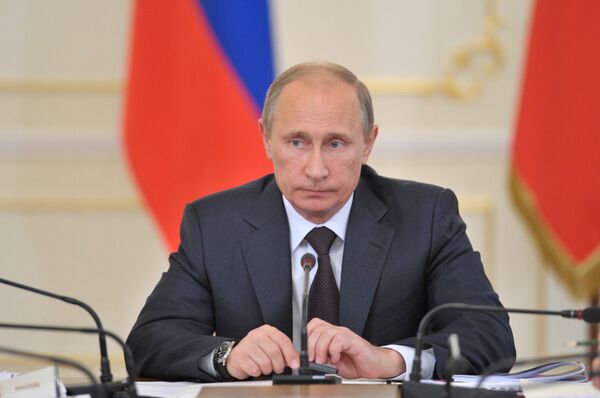 The Moscow-led Customs Union of Russia, Belarus and Kazakhstan may have to use protective measures should Ukraine sign an association agreement with the European Union, Russian President Vladimir Putin has said.

ROSTOV-ON-DON, August 23 (RIA Novosti) - The Moscow-led Customs Union of Russia, Belarus and Kazakhstan may have to use protective measures should Ukraine sign an association agreement with the European Union, Russian President Vladimir Putin has said.

“If our neighbors [Ukraine] resort to a substantial liberalization of their customs regime with the EU, goods that are not bad in terms of quality and price would inevitably gush to the Ukrainian market, but they would be squeezing out Ukrainian-made goods from the Ukrainian market,” Putin said Thursday.

“Then the Customs Union countries would have to think about protective measures,” he said at a meeting on the social and economic development of the southern Russian Rostov Region that borders on Ukraine.

Putin said that the country of origin would be hard to identify for such goods.

The Russian president said a Ukrainian delegation would arrive in Moscow next week for consultations over Kiev’s plans of cooperation with the EU.

Ukraine's Ministry of Revenues and Duties said Tuesday Russia’s customs authorities had notified Ukraine that extra customs procedures for Ukrainian goods had been scrapped days after being introduced.

On July 14, Russia introduced rigorous checks of Ukrainian goods crossing its border. A number of Ukrainian manufacturers said the move de-facto blocked their exports to Russia. The restrictions have also been condemned by Ukrainian lawmakers from across the political spectrum, with some describing the move as part of a “trade war.”

Russia and Ukraine have had a series of politically driven commercial spats since the fall of the Soviet Union, and the Kremlin is currently pushing for Ukraine to join the Customs Union.

Russian presidential advisor Sergei Glazyev said Sunday that the new customs restrictions had been implemented because of the possibility of the EU and Ukraine signing an EU–Ukraine Association Agreement and establishing a Deep and Comprehensive Free Trade Area (DCFTA) at a summit due in Vilnius in November.