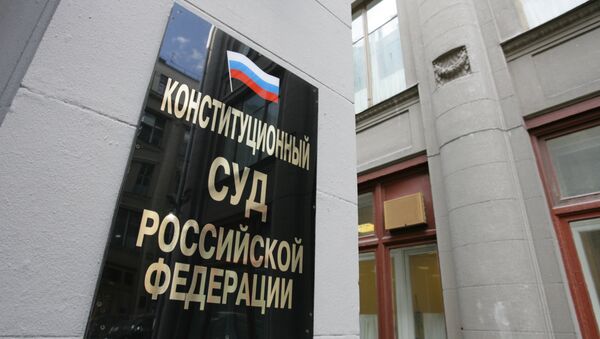 A group of Russian human rights activists has filed a complaint with the country’s Constitutional Court over a controversial law that obliges some non-governmental organizations to register as “foreign agents.”

MOSCOW, August 23 (RAPSI) – A group of Russian human rights activists has filed a complaint with the country’s Constitutional Court over a controversial law that obliges some non-governmental organizations to register as “foreign agents.”

The complaint against the law, under which all NGOs engaged in political activity and receiving funding from abroad must register as “foreign agents,” was lodged by the Kostroma Center for Civic Initiatives Support, which was fined 300,000 rubles ($9,000) in May for breaching the law. In addition, the NGO’s executive director Alexander Zamaryanov was personally fined 100,000 rubles ($3,000).

The prosecutors claimed that the NGO received funds from abroad and was engaged in political activities, but had failed to duly register itself on the list of “foreign agents.” According to prosecutors, the organization held a round table panel in February that was attended by an American diplomat.

The NGO filed an application with a local court protesting the fine, but the decision was upheld.

In its application to the Constitutional Court, the organization complains that the explanation of “political activity” in the wording of the law is ambiguous, and consequently leads to constitutional rights being violated.

The application is currently in the preliminary phase of consideration in the court's registry.

A federal law was passed last November requiring all NGOs engaged in political activity and receiving financing from abroad to register as "foreign agents," or face fines of up to 500,000 rubles ($16,000). The term was slammed by rights activists and others as having clear connotations of espionage.

The introduction of the law was followed in March by a series of sweeping inspections of NGOs. The Justice Ministry said its goal was to check that the organizations' activities corresponded to the objectives set out in their charters and Russian legislation. Up to 2,000 rights groups and NGOs in Russia were raided by prosecutors and other officials, according to some estimates. State officials came under fire from international human rights groups and Western governments for carrying out unannounced and lengthy inspections.