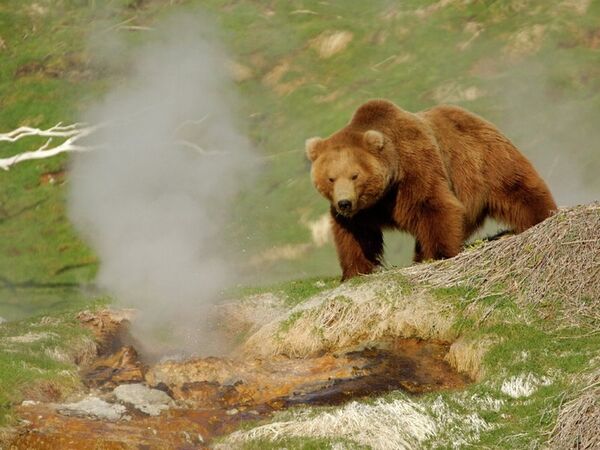 © Photo : Igor Shpilenok
Subscribe
It’s not only the living who are at risk of being eaten by brown bears in Russia’s Far East.

ANADYR, August 22 (RIA Novosti) – It’s not only the living who are at risk of being eaten by brown bears in Russia’s Far East.

Last week, rangers in the Chukotka Region were given license to kill brown bears without prior permission after the animals began appearing more frequently in populated areas. This week, it emerged that bears had paid a visit to a local cemetery, seemingly in search of easy prey.

Brown bears dug up 38 graves in the village of Uelen, Russia’s easternmost inhabited area, the deputy head of animal protection and conservation in the region told RIA Novosti on Thursday.

“Judging from the evidence, they were young bears aged two to three years old, three or four of them,” said Yegor Vereshchagin. “The decision has been made to shoot the bears; local hunters have been enlisted.”

He said the measure was necessary because the bears could attack people. Even if they are driven away from the cemetery, the young predators are unlikely to refrain from dining out on prey as easily obtained as that of recently buried human corpses, the official added.

Last week, the region’s hunting and nature conservation head said his department was getting increasingly frequent reports of brown bears sighted in or near populated areas.

“Seventeen brown bears have been shot in Chukotka since June to control their population, and this number could rise in August and September, since the animals are demonstrating heightened activity,” Alexander Fatin said. “For comparison, during the whole summer last year, 16 animals who had ventured into populated areas or fishing spots and were a threat to people were killed,” he added.

The official hunting season for brown bears in the region began on August 1. During open season, up to 100 animals – or 3.2 percent of the bear population – may be killed, Fatin said.

The incident in Chukotka is not the first time hungry bears have resorted to snacking on the contents of coffins. Two bears were shot in the neighboring Kamchatka Region after they were spotted digging up graves and feasting at a local cemetery, police there said in May.

The police found that the animals had dug out a grave closest to the road and broken open a coffin.