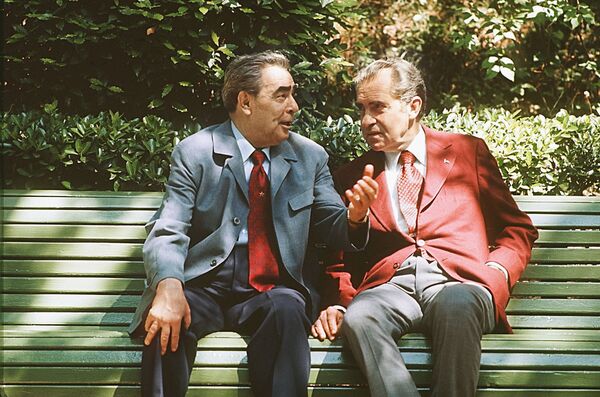 © RIA Novosti . Yury Abramochkin
/
Go to the photo bank
Subscribe
Former US President Richard Nixon and former Soviet leader Leonid Brezhnev chatted about superstition, jet lag and cutting down on smoking ahead of their historic 1973 summit in Washington, according to secret White House recordings released this week.

WASHINGTON, August 22 (RIA Novosti) – Former US President Richard Nixon and former Soviet leader Leonid Brezhnev chatted about superstition, jet lag and cutting down on smoking ahead of their historic 1973 summit in Washington, according to secret White House recordings released this week.

The two leaders spoke for about an hour in the Oval Office on June 18, 1973, with only an interpreter present, with both leaders expressing a desire for world peace and bilateral cooperation in a conversation that also touched on family and reveals a seemingly warm personal rapport between the two men.

“I think that our personal relationship will unlock the door for the continuing relationship between our two countries, which will contribute to peace in the world,” Nixon told Brezhnev in the recording released Wednesday by the US National Archives and Records Administration.

The recording, the only known record of the conversation, was released along with nearly 340 hours of secret White House recordings made by Nixon during his time in office. To date some 3,000 hours of Nixon’s secret recordings have been made public, with another 700 currently being reviewed.

The meeting took place prior to the two leaders’ week-long summit in Washington that came amid Nixon’s détente strategy with the Soviet Union at the height of the Cold War.

Brezhnev told Nixon he had high hopes for the meeting, citing a Russian superstition that considers rainy weather a good omen when departing on a journey.

“And especially since it was raining both in Moscow and in Washington, that makes it a double, extra good omen,” Brezhnev tells Nixon. “Oh, I think that’s of enormous [significance], Mr. President.”

At the beginning of the meeting, Brezhnev shows Nixon a cigarette box outfitted with a mechanism preventing it from being opened more than once an hour, a gadget the leaders agree could be useful on cutting back on smoking.

“That’s a way to discipline yourself,” Nixon quips.

The two leaders also discuss their families, with Brezhnev telling Nixon that illness and previous commitments prevented his wife and children from making the trip with him, as well as the jet lag that the Soviet leader hoped to combat by stealing a lunch-break nap during the summit.

“Because if we take Moscow time, tonight’s dinner will end at something like 5 a.m.,” Brezhnev said.

The summit followed Nixon’s visit to Moscow the previous year, and in their Oval Office meeting, the leaders discuss plans for what would become their third and final summit in Moscow in 1974.

Brezhnev proposes visiting Washington again in 1975 and hosting Nixon in the Soviet Union for a 1976 summit, though neither of those trips materialized. Less than two months after returning from his summit with Brezhnev in Moscow, Nixon resigned from office on Aug. 9, 1974, in the face of likely impeachment amid the Watergate scandal.

The 1973 summit that followed the leaders’ White House meeting secretly recorded by Nixon included a trip to the US president’s home in San Clemente, California.

During his California sojourn, Brezhnev declined to stay in larger accommodations at the Camp Pendleton military base, opting instead to stay at Nixon’s home, where he was set up in the room of the American president’s eldest daughter Tricia, according to the Nixon Foundation.

The room’s décor did not exactly fit with the image of the leader of a global superpower; Nixon’s other daughter, Julie, later recalled.

Brezhnev was “ensconced in Tricia’s feminine room, with its fragile white wicker furniture and walls papered in bold pink, blue, and lavender flowers,” Julie Nixon Eisenhower said, according to the Nixon Foundation.