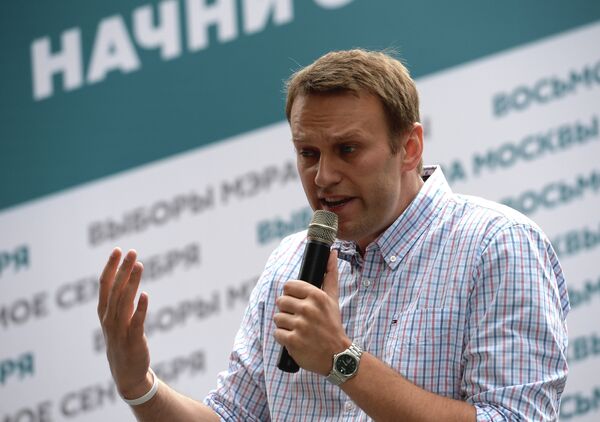 © RIA Novosti . Vladimir Pesnya
/
Go to the photo bank
Subscribe
A Moscow court on Thursday rejected a motion launched by opposition activist Alexei Navalny to verify the paperwork permitting his rival for Moscow mayor – the incumbent, Sergei Sobyanin – to run again for the office.

MOSCOW, August 22 (RAPSI) – A Moscow court on Thursday rejected a motion launched by opposition activist Alexei Navalny to verify the paperwork permitting his rival for Moscow mayor – the incumbent, Sergei Sobyanin – to run again for the office.

Navalny, a candidate in the upcoming elections for Moscow mayor due to be held on September 8, had asked the Moscow City Court to verify the authenticity of President Vladimir Putin's signature on Sobyanin’s documents, RAPSI legal news agency reports from the courtroom.

The activist's attorney says that the paperwork allowing Sobyanin, who officially resigned in June and immediately said he would run again in snap elections, is "questionable." The lawyer says there are discrepancies in how the paperwork was filled out, and that the document was officially filed by the mayor's office, rather than by an independent citizen as required.

The Moscow election regulator representative and the prosecution had opposed Navalny’s motion for an expert handwriting analysis of the signature on the paperwork.

Sobyanin, who was appointed to the position of Moscow Mayor by then-President Dmitry Medvedev in 2010 and enjoys the support of the ruling United Russia party, is the clear frontrunner in the race according to recent polls. The Moscow mayoral election will be the first in a decade: From 2004 to 2012, governors and mayors in Russia were appointed by the president. Direct mayoral and gubernatorial elections were reintroduced last year in the wake of widespread protests sparked by allegations of large-scale electoral fraud in the December 2011 parliamentary polls. Navalny was a key figure in those protests.

Anti-corruption activist Navalny was convicted in July of embezzlement and sentenced to five years in a penal colony. He denied the charges, claiming the trial was politically motivated and orchestrated by the Kremlin in response to his role in organizing the public protests against Putin.

In a surprise move, prosecutors then filed a request for him and his co-defendant, who was sentenced to four years, to be released from custody pending appeal.

In addition to the embezzlement case, investigators have opened three other criminal cases against Navalny, on charges of embezzlement from a political party, deceiving an international cosmetics company, and illegally conspiring to privatize a distillery in central Russia.