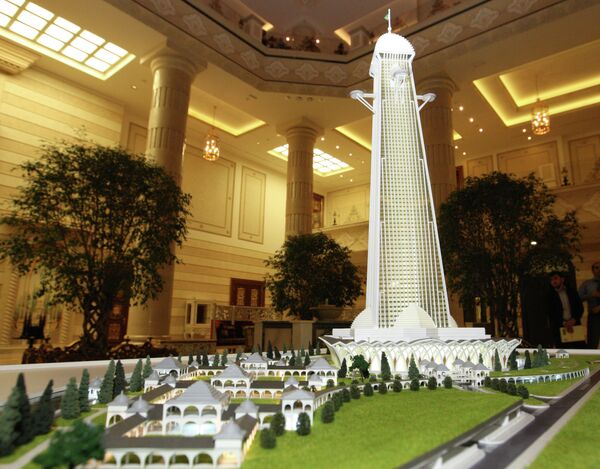 The new skyscraper is modeled on the medieval watchtowers that still stand on the ridges of the Caucasus mountains, and will “bear inimitable features of [Chechen] national uniqueness,” a statement posted on Chechen’ government’s website said.

Construction will be financed by “out-of-budget” funds from unspecified investors, the statement said, but did not say how much the mammoth project was expected to cost.

The building will be named after Kadyrov’s father, Akhmad, who was assassinated in 2004, and will take up to three years to complete, it said.

“This will be the most technically complicated construction in the world because the [Chechen] republic is located in a seismically active area of the [Richter scale] 10 magnitude,” one of the building’s two architects, Vladimir Travush, was quoted in the statement as saying. Travush has extensive experience of building tall structures, including Moscow’s Ostankino TV tower, the statement said.

“It’s a vertical city, because the tower will combine many city functions,” the building’s second architect Alexander Zusik was quoted in the statement as saying. “I think the Akhmad Tower will be a worthy commemoration” of Akhmad Kadyrov, he added.

The skyscraper will be part of the Grozny City-2 complex that will also include a museum dedicated to Akhmad Kadyrov, a hotel, restaurants, helicopter pads, fitness centers and swimming pools, the statement said.

Ramzan Kadyrov has also approved the construction of a giant swimming pool that will cover part of the nearby Sundzha River near the complex, it said. “This way, the river will have two stories,” it said.

Kadyrov, a bull-necked, bearded boxing aficionado, has a penchant for grandiose architectural projects in the Chechen capital that has been almost entirely rebuilt since being severely damaged during the two separatist wars since the mid-1990s. 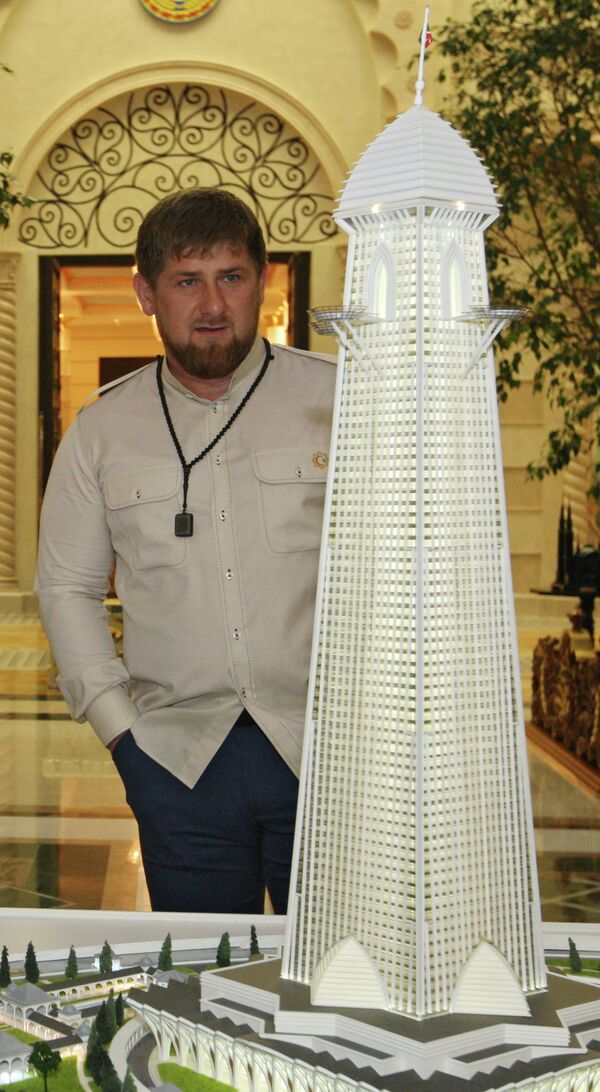 Ramzan Kadyrov with a model of the new skyscraper
© RIA Novosti . Said Tsarnaev

Grozny already hosts Russia’s largest mosque and the 42-story Grozny-City complex, and Kadyrov has also commissioned construction of another giant mosque that will bear his name.

The mountainous republic, the size of the US state of Connecticut, is one of Russia’s poorest regions, with very high unemployment and a heavy reliance on the federal budget.

Kadyrov joined anti-Kremlin Chechen separatists in the mid-1990s along with his father Akhmad, a prominent cleric with one of the powerful Sufi brotherhoods that have traditionally held sway in Chechnya.

But after their clan fell out with other insurgents inspired by the radical Wahhabist ideology, the elder Kadyrov headed Chechnya’s pro-Kremlin government in the early 2000s and was instrumental in largely putting down the rebel movement there. Kadyrov senior was killed in a 2004 bomb attack in Grozny's main stadium.

Human rights groups and critics have long accused Ramzan Kadyrov and his local militia of abductions, extrajudicial killings, torture and other grave human rights abuses, which he has consistently denied.

The Kremlin has credited him with restoring peace in the war-ravaged province and returning tens of thousands of refugees to Chechnya, while the insurgent violence has largely migrated to neighboring republics of the volatile North Caucasus region.