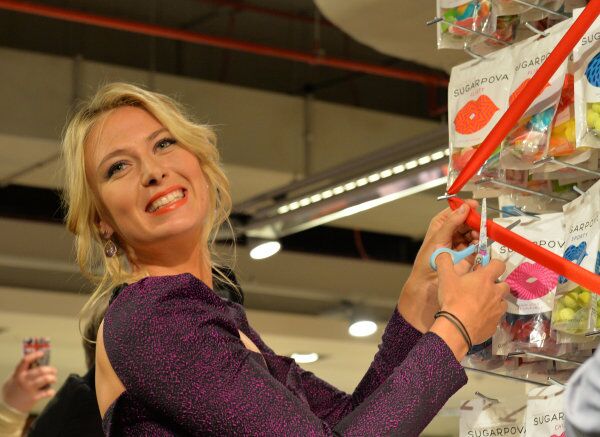 © RIA Novosti . Iliya Pitalev
Subscribe
Russian tennis superstar Maria Sharapova has dropped a bid to temporarily change her last name to “Sugarpova” during the upcoming US Open tournament to promote the brand of sweets she launched last year, her agent told US sports network ESPN.

WASHINGTON, August 21 (RIA Novosti) - Russian tennis superstar Maria Sharapova has dropped a bid to temporarily change her last name to “Sugarpova” during the upcoming US Open tournament to promote the brand of sweets she launched last year, her agent told US sports network ESPN.

“We ultimately decided against it," Sharapova’s agent Max Eisenbud told ESPN on Tuesday.

“At the end of the day, we would have to change all her identification, she has to travel to Japan and China right after the tournament and it was going to be very difficult," Eisenbud said.

Sharapova, 26, had reportedly filed a petition with the Supreme Court of Florida, where she resides, to allow her a temporary name change for the two-week duration of the last Grand Slam event of the year to promote the Sugarpova line of sweets, The Times of London reported Tuesday.

Under Florida law, Sharapova would also have to submit fingerprints, have a criminal record check, and, once those were both in hand, request a hearing before a judge. Name changes in the United States usually take several months, and it was unclear if Sharapova would have been able to become Sugarpova in time for the US Open.

Had the US court ruled in favor of the name change, Sharapova also would have needed the approval of the organizers of the US Open to be able to play as Sugarpova.

Michael Zammuto, president of Brand.com, told Forbes Magazine that Sharapova might have run into problems with her sponsors over the name change.

Sharapova has topped the Forbes list of highest-earning female athletes for nine straight years, with sponsors’ endorsements estimated this year at $23 million.

She is currently the third ranked female tennis player in the world by the Women’s Tennis Association, behind American Serena Williams and Belarusian Victoria Azarenka.

Some 1.8 million bags of her line of Sugarpova gummy candies and gum have sold in North America, Europe and Asia since the brand was launched, with Sharapova reportedly getting as much as $1.10 a bag. Sharapova has said she plans to expand the brand to include cosmetics, fashion and other accessories.