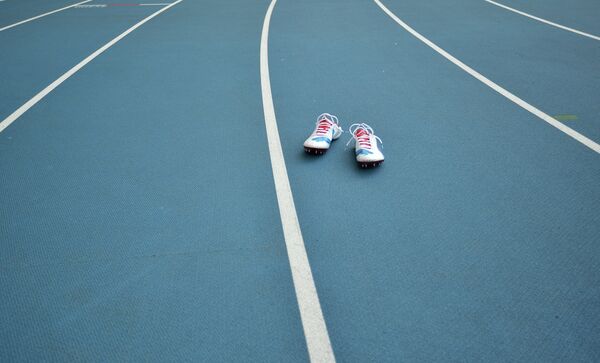 © RIA Novosti . Ramil Sitdikov
/
Go to the photo bank
Subscribe
Russia has ruled out naturalizing a Cuban hurdler who reportedly deserted his team while the delegation was in Moscow for this month's world championships, the country's athletics chief told R-Sport on Wednesday.

MOSCOW, August 21 (R-Sport) – Russia has ruled out naturalizing a Cuban hurdler who reportedly deserted his team while the delegation was in Moscow for this month's world championships, the country's athletics chief told R-Sport on Wednesday.

Ortega, 22, disappeared after failing to qualify for the final of the 110m hurdles at the world championships last week and didn’t return home, the Cuban Athletics Federation said earlier in the day, according to a website whose exact affiliation with the body is unclear.

The Cuban Embassy has appeared to confirm his disappearance, and his current whereabouts remain unknown.

“The Russian Athletics Federation is not interested in Ortega’s services as an athlete,” Valentin Balakhnichev told R-Sport.

“I have no information about the location of Ortega, as we haven’t received any requests from him. It was his decision to leave his team and he didn’t return to his homeland and it will weigh upon his conscience.”

Balakhnichev is known as a supporter of sporting immigration to boost the country's sporting prowess but added Russia will only attract young promising athletes who are willing to absorb Russian culture.

“I support the change of sporting allegiances only if athletes come to Russia to learn, live, study Russian, culture and become Russians,” he said. “We don’t want to invite athletes of Olympic Games finals level, but talented guys of young age who have good prospects.”

In May, Balakhnichev said the country had plans to naturalize foreign athletes in the problem events like middle- and long-distance running.

Ortega's best international achievement is a bronze medal in the 2011 Pan American Games in Guadalajara; he made the final of the London 2012 Olympics last year but finished sixth.

Ortega's reported disappearance comes two months after his countryman and Beijing 2008 Olympic champion Dayron Robles was banned from representing Cuba for unspecified "problems of discipline and sportsmanship," the federation said.

Ortega himself was suspended in July on similarly vague charges of "serious indiscipline" but the ban was lifted ahead of the Moscow championships.