Russian ‘Amazon’ Buried With Cosmetics Could Be Man – Scholar 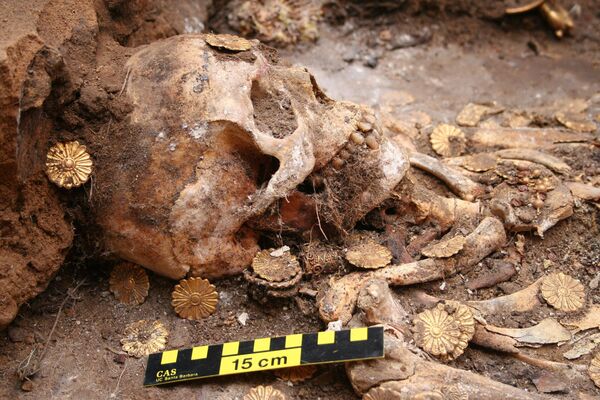 © Photo : Leonid Yablonsky
Subscribe
An ancient nomad’s skeleton adorned with bracelets and jewelry and surrounded by jars with steppe fashionista’s war paint could in fact have belonged to a man, a senior Russian archeologist said Tuesday.

MOSCOW, August 20 (RIA Novosti) – An ancient nomad’s skeleton adorned with bracelets and jewelry and surrounded by jars with steppe fashionista’s war paint could in fact have belonged to a man, a senior Russian archeologist said Tuesday.

Earlier this month, archeologists uncovered a burial vault near the village of Filippovka in the southern Orenburg region that contained the skeleton with two golden earrings, bracelets on its wrists and golden rings on each finger. The skeleton held a silver mirror with an ornamented golden handle, while next to it were vessels for balms and cosmetics and a giant bronze kettle whose hafts were shaped like griffin heads.

Archeologists said initially that the vault – located 4 meters (13 feet) underground – belonged to a noble nomadic woman whom they dubbed a “Sarmatian Amazon.” The Sarmatians were a group of Persian-speaking tribes that controlled an area that is now parts of southern Russia, Ukraine and Central Asia from around 500 BC to 400 AD.

But an analysis of the skeleton’s bones showed that they might belong to a man in his forties, said Professor Leonid Yablonsky of Moscow’s Archeology Institute, who heads the expedition that excavated the remains.

He said that the skeleton had male morphology and only a DNA analysis – that his expedition currently cannot afford – can accurately determine the skeleton’s sex.

The Sarmatians were often mentioned by ancient Greek and Roman historians and left luxurious tombs with exquisite golden and bronze artifacts. The vault was found in the “Tsar Tumulus,” a group of two dozen mounds where hundreds of golden and silver figurines of deer, griffins and camels, vessels and weapons have been found since the 1980s.

Some Sarmatian tribes – also known as Alans – invaded what is now France, Spain and Northern Africa as part of the Great Migration that contributed to the fall of the Western Roman Empire in the first centuries AD, historians say.

British historian and filmmaker Howard Reid claimed in his 2001 book, “Arthur the Dragon King” that the legendary British ruler was one of the heavily armed Alan horsemen that managed to get to Britain – and whose armor and strategy was later used by medieval knights.

Possible British ties notwithstanding, the proven descendants of the Sarmatians include the Ossetians, an ethnic group living in the Caucasus region, who speak a language related to Persian.