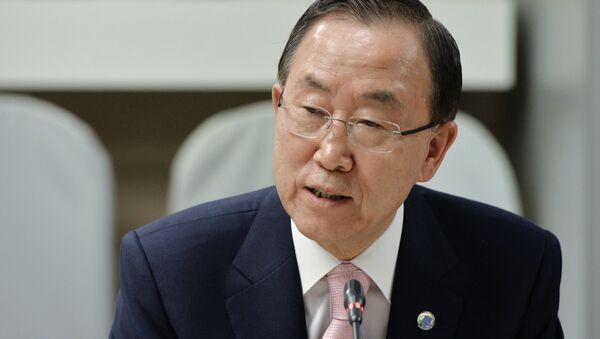 United Nations Secretary General Ban Ki-moon said Monday that a team of UN experts investigating the alleged use of chemical weapons in Syria should have full access to reported chemical attack sites.

He said the UN chemical weapons investigators, who arrived in the Syrian capital Damascus on Sunday, should also be allowed to undertake necessary analysis and collect samples, as well as interview and examine witnesses, victims, attending medical personnel, and to conduct of post-mortem examinations.

"In order to credibly establish the facts, the mission must have full access to the sites of the alleged incidents," he said.

"The government and all other entities within Syria must ensure the safety and security of the mission," Ban said, adding that the complicated security situation in the war-torn country would “undoubtedly affect the mission's activities.”

He also said that if the use of chemical weapons in Syria were confirmed, those responsible should be brought to justice.

Both sides in the ongoing Syrian civil war have traded allegations of chemical weapons use. The UN investigative team had been unable to travel to Syria because of diplomatic wrangling over the scope of the access they would have.

The UN team, headed by Swedish expert Ake Sellstrom, started its work in Damascus on Monday. Ban confirmed that the team would investigate the reported March 19 chemical attack in Khan al-Assal and in two other locations, which are being kept secret for security reasons. UN investigators are scheduled to work in Syria for two weeks, and their mandate might be extended upon agreement from both sides.