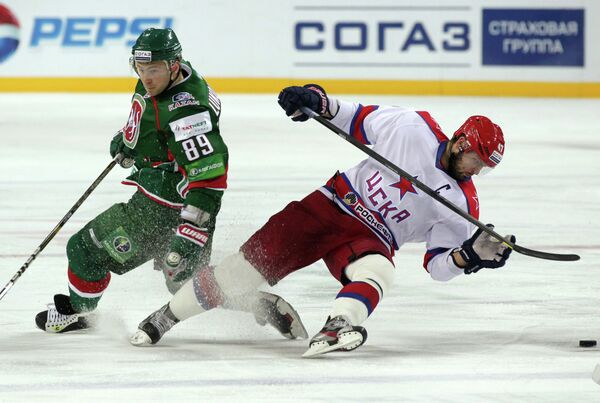 According to the ministry, Lukoyanov, 24, who plays for Ak Bars Kazan in Russia’s KHL hockey league, was in the process of being arrested for disorderly conduct just after 1 a.m. Sunday when a friend lunged at the arresting officer.

“One of the visitors, Lukoyanov, was provoking staff and other guests,” the source said. “Police had decided to escort him out, but then a friend of his went at one of the policemen from behind, grabbed him, and began choking him and hitting his back.”

Lukoyanov then struck one of the officers in the side of head and attempted to steal his gun, the ministry source said. The brawl was stopped after police fired two shots into the air and the two men were detained.

Both Lukoyanov and his friend were “in a state of intoxication,” a regional police source told RIA Novosti. It was unclear Monday afternoon what charges the men are facing.

Lukoyanov, who was born in Almetyevsk, about 250 kilometers (150 miles) southeast of Kazan, is entering his third season with Ak Bars. The 6-foot, 187-pound (1.83 meter, 85 kg) forward had three goals, eight assists and 14 penalty minutes in 48 appearances last season.