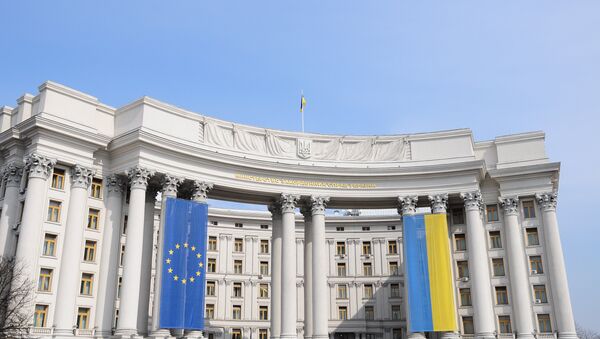 A senior Kremlin official has warned it would be “suicidal” for Ukraine to sign a free trade agreement with the European Union, adding such a step would trigger a permanent tightening of customs procedures for Ukrainian goods entering Russia.

MOSCOW, August 19 (RIA Novosti) – A senior Kremlin official has warned it would be “suicidal” for Ukraine to sign a free trade agreement with the European Union, adding such a step would trigger a permanent tightening of customs procedures for Ukrainian goods entering Russia.

Large freight car queues formed last week at the Russia-Ukraine border after Russia increased the amount of checks on imported Ukrainian goods, in an apparent dry-run of measures that would be introduced permanently should Kiev enter such an agreement with the EU.

Russian presidential advisor Sergei Glazyev said Sunday that the new customs restrictions had been implemented because of the possibility of the EU and Ukraine signing an EU–Ukraine Association Agreement and establishing a Deep and Comprehensive Free Trade Area (DCFTA) at summit scheduled to take place in Vilnius in November.

“We are preparing to tighten the customs regime just in case Ukraine takes the suicidal step of signing an agreement of association with the EU,” Glazyev told reporters Sunday. He added that the new customs measures would be required because European and Turkish goods, which would flood into the Ukraine after the signing of such a deal, could be re-exported to Russia.

Glazyev’s comments follow a weekend of diplomatic negotiations on the issue. Russian President Vladimir Putin spoke with his counterpart President Viktor Yanukovych about the situation on Friday, according to a statement on the Kremlin website.

And Prime Minister Dmitry Medvedev spoke to Ukrainian Prime Minister Nikolai Azarov on Sunday, according to a statement on the government’s website. Talks about resolving the conflict will take place between customs officials from both sides this week, the statement said.

Glazyev also said Sunday that the situation on the border, where there were long delays for Ukrainian exporters for most of last week, was “normalizing.”

The Russian restrictions introduced last week were condemned by Ukrainian lawmakers from across the political spectrum, with some describing the move as part of a “trade war.”

The issue of Ukraine’s possible accession to the Customs Union has major political resonance. In December 2012, US Secretary of State Hillary Clinton criticized the initiative in an address to the Organization for Security and Cooperation in Europe.

“It’s going to be called a Customs Union, it will be called Eurasian Union and all of that. But let’s make no mistake about it,” Clinton said, branding the move “re-Sovietization.”

Putin responded by defending what he called a “natural process” of integration driven by the mutual economic interests of the countries involved.