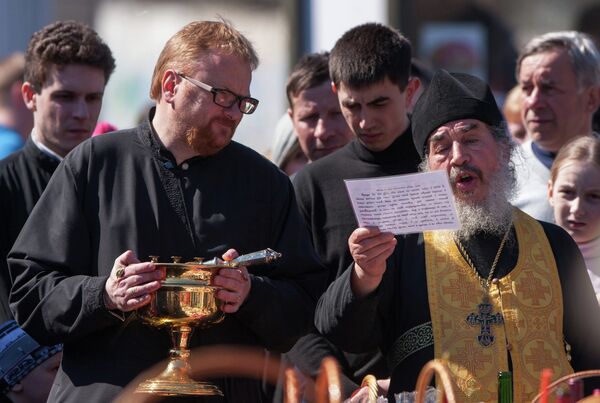 © RIA Novosti . Anna Volkova
/
Go to the mediabank
Subscribe
International
India
Africa
Unidentified “scum” threw a Molotov cocktail at a Russian Orthodox Church where the lawmaker who kick-started Russia’s anti-“gay propaganda” trend helps out as an altar server, the legislator said on Twitter.

MOSCOW, August 19 (RIA Novosti) – Unidentified “scum” threw a Molotov cocktail at a Russian Orthodox Church where the lawmaker who kick-started Russia’s anti-“gay propaganda” trend helps out as an altar server, the legislator said on Twitter.

“We’ll find them and destroy them,” St. Petersburg city legislator Vitaly Milonov pledged in another Tweet late Sunday. The Church of Holy Peter the Metropolitan Bishop of Moscow, in the city’s south, was attacked on Sunday night, local media reported.

The attack literally backfired: Surveillance cameras showed that one of the two masked attackers had his hands on fire after the Molotov bottle failed to break a window, news site Fontanka.ru said.

Damage to the building was reportedly limited to a scorched window frame. A criminal case has been opened on hooliganism charges, a city police spokesman told RIA Novosti on Monday. He reported no leads.

Milonov blamed the attack on moral decadence in Russia, citing as an example a rally of half a dozen followers of the tongue-in-cheek religion Pastafarianism who marched through St. Petersburg wearing pasta strainers on their heads last weekend. However, the lawmaker stopped short of accusing the flock of the Flying Spaghetti Monster, whose church was officially registered in Russia in July, of torching the church of a rival god.

Milonov, 39, was the main driving force of the ban on “gay propaganda” among minors introduced in St. Petersburg in 2011 and later adopted on the federal level despite international outcry. The former hippie-turned-ultraconservative Christian has also unsuccessfully sought to have pop stars Madonna and Lady Gaga punished for supporting gay rights at their Russian shows – which, he said, amounted to “gay propaganda.”

A church was fire-bombed in Russia’s fifth-biggest city of Nizhny Novgorod in June. Local police blamed the attack on two activists of the radical leftist organization Left Front, whose leadership said that, despite the group’s staunchly atheist ideology, it did not endorse the burning of churches.