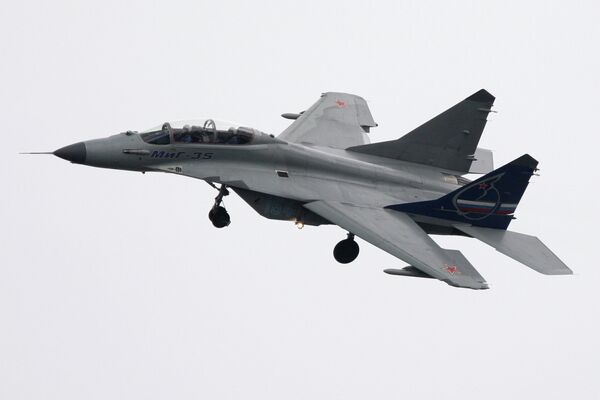 The ministry was originally due to sign the purchase agreement with MiG in June, but last month the aircraft corporation's general director Sergei Korotkov told RIA Novosti that the contract had still not been signed.

The ministry will now sign the contract in 2016, thereby putting off spending about 37 billion rubles ($1.1 billion) from the state armament program budget to a later payment period, as requested by the Finance Ministry, Kommersant said.

The newspaper cited a Defense Ministry source as saying that the ministry had not been able to issue the order over delays in drawing up the design.

“At the same time as that was going on, we received a proposal from the Finance Ministry to delay spending until 2016 part of the funds allocated within the state arms program for 2014-2016,” the newspaper quoted the source as saying.

“After analyzing [the situation] we made the decision to put back the purchase of the MiG-35s,” the source said, adding that the number of jets the ministry plans to buy – 37 – remains unchanged.

The Mikoyan MiG-35 (Fulcrum-F) is a 4++ generation fighter jet and a modification of the MiG-29M. It is equipped with air-to-air and air-to-surface guided missiles, as well as the Zhuk-A radar system.

Kommersant also reported that MiG may soon receive an order for MiG-29SMT fighter jets from the Defense Ministry, citing the source as saying that both sides were “ready to consider the purchase of such planes for delivery by 2016.”