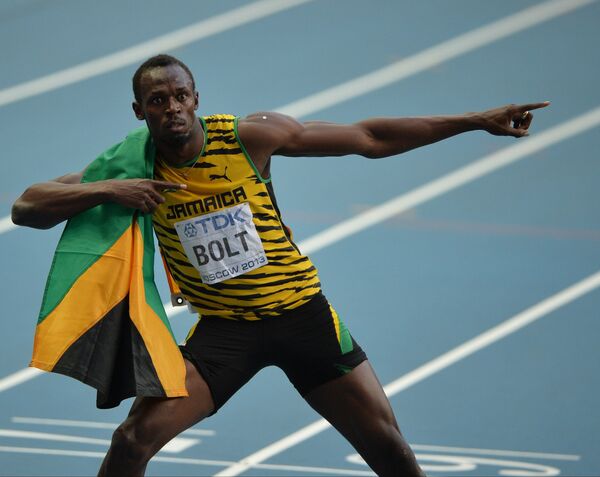 MOSCOW, August 17 (R-Sport) – Jamaican sprinting superstar Usain Bolt won his third straight world 200 meter gold medal with a solid run in Moscow on Saturday.
Bolt, who is also the Olympic champion and world record holder for the discipline, won in a time of 19.66 seconds, the fastest time of any sprinter this year but shy of the world-record 19.19 he ran en route to his first world 200m title in Berlin four years ago.
"My coach said if you started getting tired, there was no any sense in pushing your body cause then you get injured," Bolt said. "So I decided to look around, I saw I was going to win, so I backed out a little bit.”
Bolt, 26, is the first man to win world 200m gold three times in a row, and victory with the Jamaican team in Sunday's 4x100m realy would put him top of the all-time medals table for athletes at the world championships, ahead of U.S. track legends Carl Lewis and Michael Johnson.
"For me it means a lot more to defend my 200m title than to actually win the 100m,” Bolt said of the event where he started as a sprinter.
Bolt was not particularly fast out of the blocks, but ran a superb bend to give himself a commanding lead on the straight and held on to stop a very fast-finishing Warren Weir to his right.
At 150m, "I looked across and I saw Warren was there, but I could see he was tired, so I wasn’t too stressed about that," Bolt said.
The two Jamaicans then celebrated with a dance together.
“The most important was not to allow pressure to get on me, to shake it off and be myself and that's what I did,” Weir said. “I'm in a very good shape, better than last year. For now I'm just enjoying the podium and earning a silver medal.”
Weir ran a personal-best 19.79 in the far outside lane for silver, with bronze for Curtis Mitchell of the United States in 20.04.
"It is an unbelievable feeling to win this medal,” the 23-year-old Mitchell said. “The gap between Bolt and the young guys is closing. We need to continue to work hard and don't think about how to beat him. You should just be worried about the best you can be and wherever you lined up, you just need to accept it at the end of the day.”
The world championships, which are being held at Moscow’s Luzhniki arena, end Sunday.