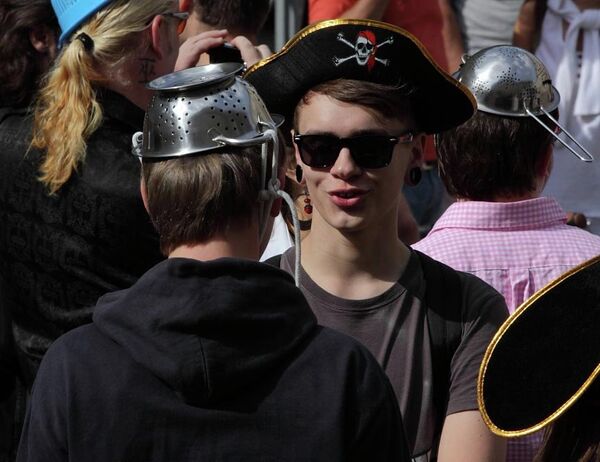 A “pasta procession” by the Russian followers of the not-so-serious Church of the Flying Spaghetti Monster was dispersed in Moscow on Saturday by riot police and Orthodox activists, the prankster movement said.

MOSCOW, August 17 (RIA Novosti) – A “pasta procession” by the Russian followers of the not-so-serious Church of the Flying Spaghetti Monster was dispersed in Moscow on Saturday by riot police and Orthodox activists, the prankster movement said.

The Moscow police press service told RIA Novosti that eight “Pastafarians” were detained for "attempting to hold an unsanctioned rally."

The Church, that also calls its flock Pastafarian, was created in 2005 by Bobby Henderson, a self-described "hobo" from Oregon, according to the movement’s website.

Pastafarians wear sieves on their heads, worship The Flying Spaghetti Monster and believe that their religion was founded by pirates, their website says. They consider every Friday a religious holiday and do not take themselves seriously, it says.

Russian Pastafarians announced a “pasta procession” in Moscow and St. Petersburg to celebrate the birthday of US actor Robert De Niro who played a character nicknamed “Noodles” in Sergio Leone’s 1984 mafia drama Once Upon A Time In America, according to their web-posted statement.

However, Moscow authorities did not sanction the procession which was disrupted by riot police and activists with the God’s Will Orthodox group headed by Dmitri Enteo, according to a message by Russian Pastafarians on a social networking website.

God’s Will has held numerous rallies against Russian gays and the Pussy Riot punk rock band whose two members were sentenced to two years in jail for hooliganism last August.

“Guys, because of the dispersion by riot police and provocations by Enteo and Co the Ramen [noodles] eating arrangement is canceled,” the message said.

“We were detained for simply walking,” a message posted by another Pastafarian said. “In particular, I was taken in for a sieve on my head.”