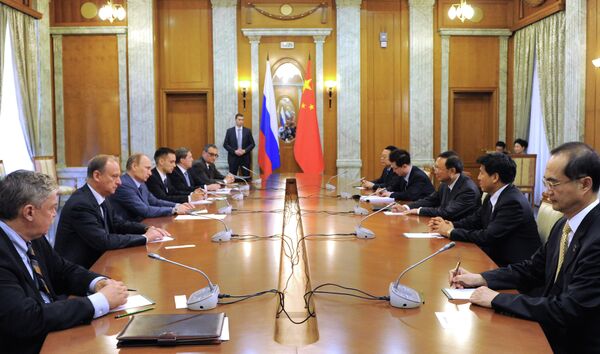 Russia and China have strong military ties, as exemplified by a recent series of joint exercises in the Ural Mountains, Russian President Vladimir Putin said Friday.

“We have been successfully collaborating in the military and technical sphere,” Putin said at a meeting with Chinese State Councilor Yang Jiechi. “Exercises between our armed units testify to that.”

The counter-terrorism exercise series Peace Mission 2013 was held in Russia's Chelyabinsk Region in the Urals from July 27 until August 15 and involved personnel from both countries.

Moscow and Beijing have recently vowed to strengthen military cooperation to ensure an adequate and prompt response to common threats.

Putin recalled that he had known the Chinese state councilor for a long time. The Russian leader said that Yang had made a great contribution to bilateral relations when he was China’s foreign minister.

“My good friend, China’s president, and I agreed to do everything to give Russian-Chinese relations a new impetus, a new quality, to take them to a higher level,” Putin said.

“This also relates to economics, and China today is in first place regarding Russian trade. The same relates to security and international peace issues,” he said.

Putin said he hoped that Yang, who assumed his new post as state councilor in March, and Russia’s Security Council would jointly do “everything possible for our priority plans to be fulfilled.”

Russia and China have held several joint military exercises since 2005 within the framework of the Shanghai Cooperation Organization (SCO), a Eurasian security bloc.

Founded in 2001, the SCO comprises Russia, China, Kazakhstan, Kyrgyzstan, Tajikistan and Uzbekistan. It aims to consolidate efforts to counter terrorism and radicalization among member countries, and to coordinate work in other areas such as politics and trade.