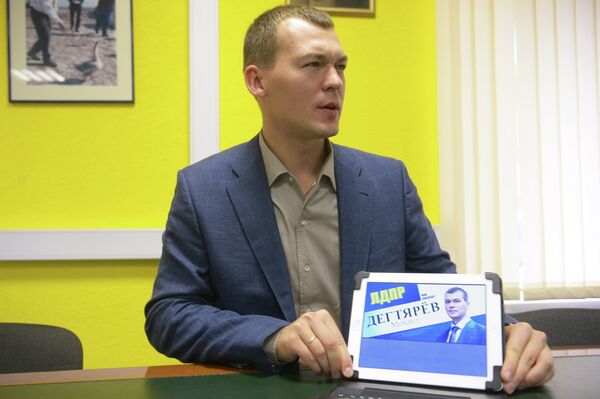 Adding to a growing pile of Russian electoral oddities, a Moscow mayoral hopeful tackled apocalyptical topics in an interview this week, saying that he expected Russia to lead the world in the victory against the Antichrist.

MOSCOW, August 16 (RIA Novosti) – Adding to a growing pile of Russian electoral oddities, a Moscow mayoral hopeful tackled apocalyptical topics in an interview this week, saying that he expected Russia to lead the world in the victory against the Antichrist.

“I can say as a believer that I believe in the Apocalypse from the point of view of faith. And I think we must prepare,” Mikhail Degtyarev of the Liberal Democratic Party said, Lenta.ru reported Friday.

“I believe that we’ll defeat the Antichrist – I’m sure of it – and that Russia will lead the fight against the Antichrist,” said Degtyarev, who is deputy head of the science and technology committee in the lower house of the Russian parliament.

He gave no timeframe for the expected Armageddon, but added that his beliefs did not interfere with his work supervising science in the country.

The Liberal Democratic Party, the political vehicle of veteran populist Vladimir Zhirinovsky, is known for its extravagant slogans and campaign stunts.

Zhirinovsky and Degtyarev held a joint meeting with voters earlier this week in a Moscow banya – a Russian steam bath – appearing before the cameras naked except for woolen hats and towels draped across their hips.

Degtyarev, 32, earlier made headlines with his proposals to ban dollars in Russia, confiscate apartments from excessively noisy owners, and give women two days off work a month during menstruation.

Interestingly, given his views on the Apocalypse, he also called for a ban on publications about the end of the world during the Doomsday hype ahead of December 21, 2012, when the world was supposed to end, according to some interpretations of an ancient Mayan calendar.

Russia will see a round of regional elections on September 8. The run-up has already produced its share of weird campaign moves, including an alleged retooling of a Nazi slogan to promote a candidate in Buryatia, and a depiction of the star of the TV show “Game of Thrones” as a resident of the city of Yekaterinburg in the Urals.