Isinbayeva Claims She Was 'Misunderstood' on Anti-Gay Comments 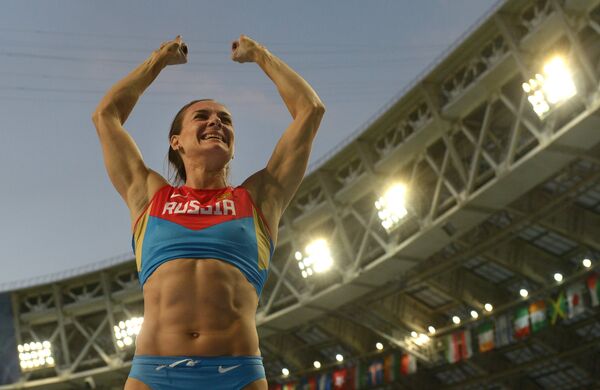 Russian pole vault great Yelena Isinbayeva on Friday claimed she "may have been misunderstood" over anti-gay remarks she made in defense of controversial legislation in her home country that forbids the promotion of homosexuality to minors.

MOSCOW, August 16 (R-Sport) – Russian pole vault great Yelena Isinbayeva on Friday claimed she "may have been misunderstood" over anti-gay remarks she made in defense of controversial legislation in her home country that forbids the promotion of homosexuality to minors.

There have been calls to revoke Isinbayeva's status as an ambassador for next year's Sochi 2014 Olympics over Thursday's comments, when she intimated there was no place in Russian society for gay people.

“We consider ourselves as traditional people, when men live with women," she had said. On the ban on holding public pro-gay events in the presence of minors, she had said: “If we will allow to promote and do all this stuff on the streets, we are very afraid for our nation,” speaking in non-native English.

After creating a storm of fury from world sports commentators and gay advocacy groups alike, she backtracked on Friday, reframing her words simply as the desire to see local laws respected.

"English is not my first language and I think I may have been misunderstood when I spoke yesterday," she said in a statement issued by the International Association of Athletics Federations.

"What I wanted to say was that people should respect the laws of other countries particularly when they are guests," Isinbayeva added. "But let me make it clear: I respect the views of my fellow athletes and let me state in the strongest terms that I am opposed to any discrimination against gay people on the grounds of their sexuality (which is against the Olympic charter).”

It is not clear whether Isinbayeva said the words in brackets at the end of the quote or if they were inserted by IAAF editors.

The controversy over her remarks has considerably overshadowed one of her most enduring sporting achievements in a glittering career that has seen 28 world records.

Isinbayeva won her first major title in five years and her third world gold medal by jumping a season's best 4.82 meters at her home event at Luzhniki Stadium in the Russian capital, arguably the highlight of the nine-day event so far.

Just moments before Isinbayeva won the gold medal, US middle distance runner Nick Symmonds dedicated a silver medal he won to his gay and lesbian friends, becoming the first athlete to criticize the law on Russian soil.

On Thursday, Swedish high jumper Emma Green Tregaro competed while sporting a rainbow manicure in support of Russia's gay community in a subtle form of protest that provoked Isinbayeva's anti-gay rant in the first place.