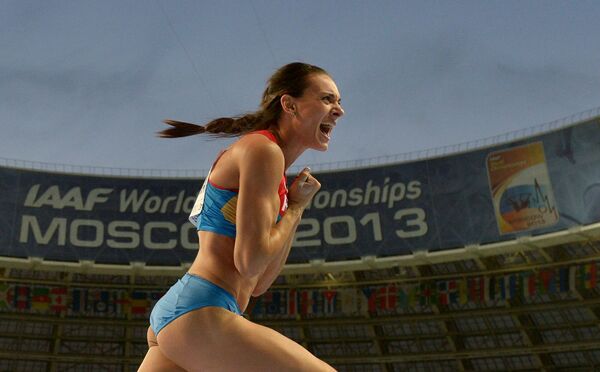 © RIA Novosti . Grigorii Sysoev
/
Go to the photo bank
Subscribe
Pole vault world record holder Yelena Isinbayeva issued a vehement defense of Russia's anti-gay law Thursday, saying she fears for the future of her country if it is not enforced.

MOSCOW, August 15 (R-Sport) – Pole vault world record holder Yelena Isinbayeva issued a vehement defense of Russia's anti-gay law Thursday, saying she fears for the future of her country if it is not enforced.

Isinbayeva, Russia's best-known active track-and-field star, will be the honorary mayor of the athletes' village in Sochi for next year's Winter Games, which some groups want to boycott due to the country's controversial banning of homosexuality promotion to minors.

“If we will allow to promote and do all this stuff on the streets, we are very afraid for our nation,” Isinbayeva, a noted supporter of President Vladimir Putin, said in English.

Russia’s Interior Ministry confirmed last week that it would enforce the law, which many activists regard as an assault on free speech, in the Olympic host city next year.

“We consider ourselves as traditional people, when men live with women. This comes from history. I hope this problem won’t affect the Sochi Games,” added Isinbayeva, who spoke two days after winning her third world title in the Russian capital.

“The Olympic movement and such things as non-traditional relationships are two different things and shouldn’t be mixed.”

Calls to boycott Russia’s first Winter Olympics were “not fair to the athletes,” Isinbayeva said.

Just moments before Isinbayeva won the gold medal in Moscow, US middle distance runner Nick Symmonds dedicated a silver medal he won to his gay and lesbian friends, becoming the first athlete to criticize the law on Russian soil. On Thursday, Swedish high jumper Emma Green Tregaro competed with rainbow fingernails in support of Russia's gay community in a subtle form of protest.

An openly gay speedskater, Blake Skjellerup of New Zealand, has already said he would wear a rainbow pin in protest at the law should he qualify for Sochi.

Isinbayeva said she had no problem with any gay athletes competing at the Sochi Olympics – “of course everybody can compete” – but she was against the discussion of gay lifestyles during the Games.

“We are not against the choice of every person. It’s their lives and choices. We are just against the publicity of it in our country, and I support our government,” she said.

The anti-gay legislation was signed into law by Putin in June and specifies fines of up to $3,000 for individuals who break it. The International Olympic Committee said last week that, before taking an official stance, it wanted clarifications on what the law means and how it will be implemented in Sochi.

The IOC has insisted it has received assurances from high-level officials that the law will not be enforced for athletes and spectators during the Games – but Russia's Interior Ministry issued a rebuttal of sorts on Monday, confirming that the "promotion of non-traditional sexual relations among minors" is illegal for anyone.

US President Barack Obama and British Prime Minister David Cameron are among those rejecting calls for a boycott.